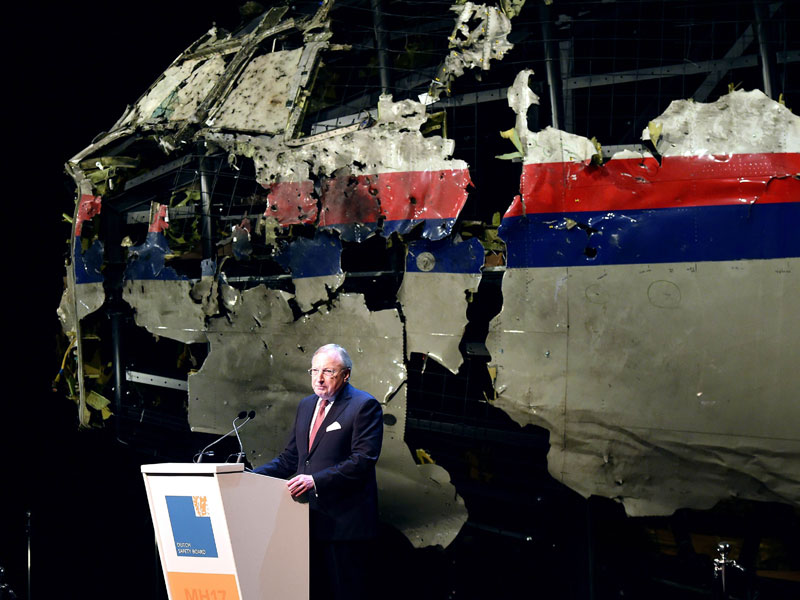 Passengers on downed Malaysia Airlines flight MH17 may have survived the “tremendous” initial blast from a Russian-made missile that tore the plane into pieces and sent it plummeting to earth.

That’s just one of the many chilling findings published in the final report from a Dutch-led investigation into the final moments of the ill-fated aircraft and the 298 people on board.

Announcing the results of the 15-month investigation from the Gilze Rijen air base in the Netherlands late last night Australian time, Dutch Safety Board (DSB) chairman Tjibbe Joustra confirmed the widely-held belief that the plane, carrying 38 Australians, was shot down over disputed territory in eastern Ukraine by a surface-to-air missile.

Three crew members, including the pilots, were killed instantly when the warhead of a Russian-made BUK surface-to-air missile exploded to the left of the cockpit, the report found.

Investigators said “hundreds” of the metal fragments were found in the bodies of these three crew members, but there was no evidence to suggest the plane’s passengers were killed by the blast directly.

Victims’ families were told in a special briefing from the DSB that their loved ones “would have died quickly”. Many would have lost consciousness within seconds of the impact, while others are thought to have been killed as the plane broke up violently in the air, investigators found.

“Some occupants suffered serious injuries that were probably fatal,” the report stated.

“In others, the exposure led to reduced awareness or unconsciousness within a very short time. It was not possible to ascertain at which moment the occupants died. The impact on the ground was not survivable.

“The Dutch Safety Board did not find any indications of conscious actions performed by the occupants after the missile’s detonation. It is likely that the occupants were barely able to comprehend the situation in which they found themselves.”

The centre section of the aircraft fell to the ground roof-first before bursting into flames on impact with the ground, the report found.

The plane was shot down on July 17, 2014, over territory held by Russian-backed separatists in eastern Ukraine, who have been widely blamed for the attack.

On announcing the results of the investigation, Mr Joustra acknowledged that Russia, which denies any involvement in the incident, disputed the report’s findings.

Just hours before its release, a spokesperson for the Russian company that made the missile said it had performed a test which “disputes the version of the Dutch”, adding that damage to the passenger plane pointed to the use of an older type of missile.

Apportioning blame for the incident was not part of the scope of the DSB investigation.

A criminal inquiry into the crash, which will examine who was responsible, will be completed mid-2016.

‘Ukraine should have shut down airspace’

Ukranian officials and commercial airlines failed to identify the risk to civilian aircraft despite the fact that 16 military aircraft had been shot down over Ukraine in the weeks leading up to the disaster, Mr Joustra said on Tuesday.

“Ukraine knew this and did not close the airspace,” he explained.

“The risks were not properly identified.”

He said the investigation had a reached a conclusion “as straightforward as it is disquieting”: that nobody gave thought to the possible threat the conflict posed to civil aviation.

Although the flight level for planes flying over Ukrainian airspace was raised twice in the weeks before the tragedy, airlines continued to frequent the popular flight route.

There were 61 commercial flights over Ukraine when MH17 was shot down.

Dutch Safety Board animation:  how the disaster unfolded

– with reporting by Emma Manser, AAP