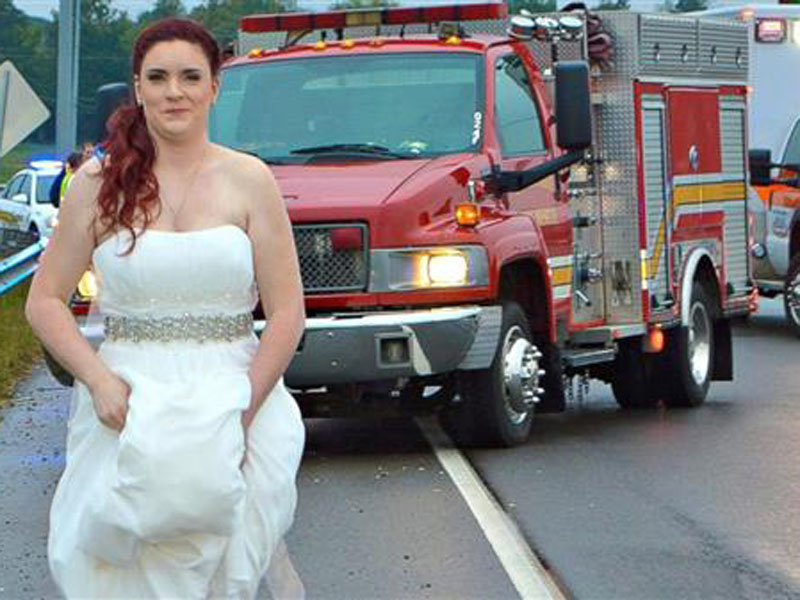 Within minutes of her wedding, a US paramedic had to attend a car crash in her wedding dress – and she knew those involved.

After the ceremony on October 3, Sarah Ray was told that her father and grandparents were in a crash while they were driving to the wedding reception in Clarksville, Tennessee.

The Leaf-Chronicle reported that Ms Ray rushed to the scene, hitched up her wedding dress and jumped into the ambulance to see how she could help out.

“The car was totaled, that’s all we knew,” Ms Ray told the newspaper.

“We hopped in the car with my sister and her husband and headed to the crash.”

Luckily, when she arrived to the scene she released her family members did not sustain any major injuries.

“The first thing she [grandmother] said to me was, ‘Oh, Sarah, I’m so sorry I ruined your day’,” Ms Ray said.

A photo of her leaving the scene of the crash in her wedding dress has gone viral.

But Sarah can’t understand what all the fuss was about, because to her, she was just doing her job.

“I just hate that everyone uses the word ‘hero’,” Ms Ray said.

“It’s not heroic. That’s just what we do every day, and it was family.

“I believe any other first responder would do the same thing. It just happened that I was in a wedding dress.”

The wedding still went on, and everyone enjoyed the celebrations.

Her new husband Paul – who is also a paramedic – said he was proud of his new wife.

“I’m just a husband in the background,” he told the newspaper.

“It’s been a mostly positive thing. We appreciate the support.”