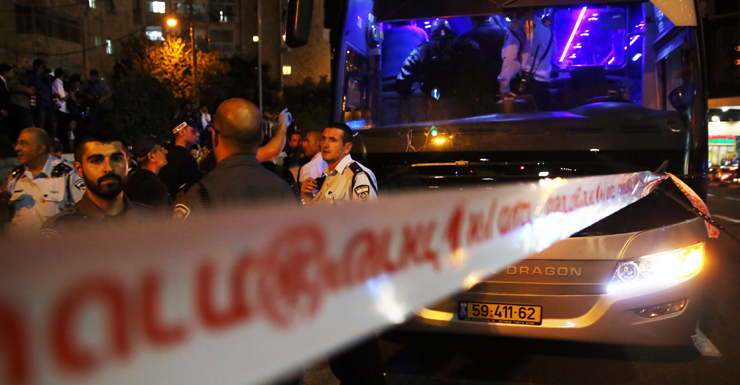 Israeli prime minister Benjamin Netanyahu has responded to three more terror-related stabbings this week in Jerusalem by vowing his country will not bow to “knife terror”.

There have been warnings of a full-scale Palestinian uprising after 18 stabbing attacks on Jews since October 3, which killed two Israelis and wounded about 20 more, including a 13-year-old who was critically injured on Monday.

PM Netanyahu said “knife terror will not defeat us” on Tuesday morning (AEDT).

His government is struggling to stop the attacks, mostly committed by young Palestinians acting alone.

The use of small arms such as knives and guns by ‘lone wolves’ has become an increased global threat after terror group Islamic State commanded its followers to perpetrate these attacks last year.

Police across the world find it difficult to prevent this threat, as the attacks are not centrally organised, are easier to plan than the use of more sophisticated weaponry such as explosives, and involve younger suspects who do not appear on terror watch lists.

On Monday, an 18-year-old Palestinian identified as Mustafa al-Khatib attacked a policeman with a knife at an entrance to Jerusalem’s Old City and was shot dead by security forces.

The police officer’s protective vest stopped the knife and he was unharmed. The attacker, from east Jerusalem, was shot dead by other officers.

Later in the day, a female attacker stabbed an Israeli policeman near the force’s headquarters in Jerusalem and was shot and wounded by the victim, police said.

In the third attack, two young Palestinian teenagers stabbed two Israelis in the east Jerusalem settlement of Pisgat Zeev, with one attacker – a 17-year-old – killed and the other, 13, shot and seriously wounded.

The victims were both Jews, with a 13-year-old who was riding a bicycle critically wounded and a 25-year-old seriously hurt, police said.

The violence began on October 1, when alleged Hamas terrorists shot dead a Jewish settler couple in the West Bank in front of their children.

In years past, the main terrorist threat to Jerusalem was from rockets fired from the West Bank and the Gaza Strip. The threat was lessened, though not completely eradicated, after Israel installed the Iron Dome missile defence system in 2011.

Militants opposed to the Israeli government have responded with new methods of terror.

—with Jackson Stiles and AAP