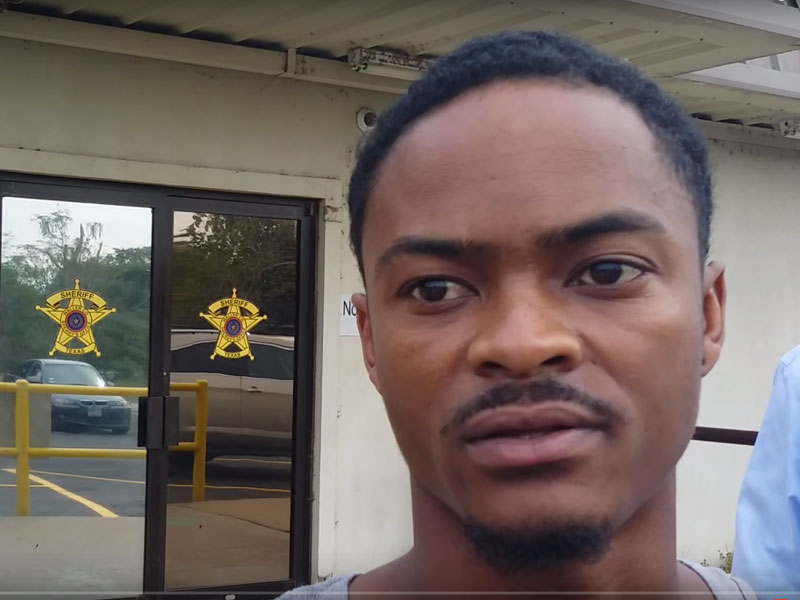 Prairie View councillor Jonathan Miller was arrested outside his home in the Texan suburb on Thursday night (Friday AEST), for doing – it seemed – very little at all.

Police said they had stopped to speak to four men about drug activity in the area, near Houston, out the front of Mr Miller’s home.

Video of the incident showed him approach police and speak to them, but was tasered moments later after police warned him not to interfere with their investigation.

“You can go to jail for interfering,” one officer said.

The 26-year-old Texan councillor cried out in pain as he was stunned and repeatedly told police: “I live here.”

He later told The Guardian he had been practicing a step dance routine with his fraternity brothers before police arrived.

KRPC reported the men were guests at Mr Miller’s home and at least one witness said they believed police had used excessive force.

“As soon as they started pushing, I pulled out my camera, because if there’s a camera the officer can’t say my battery on my body cam went out or anything like that,” witness Brandon Woodson said.

Mr Miller was charged with interference and resisting arrest. He was released from jail on bail the next morning.

“I went outside to check on my line brothers and it turned into me being accused of interference with public duties and resisting arrest,” he told Fox 26 News.

“It shouldn’t have came that far.

“It does make me a little cautious of the people I surround myself with and think are supposed to be here for my public safety.”

Both officers in the video were not named, however one was believed to be involved in the controversial July arrest of Sandra Bland.

Ms Bland was driving through Prairie View on July 10 when she was stopped by police for failing to indicate a lane change.

She committed suicide in her Waller County Jail cell three days later. Her family have since filed a wrongful death lawsuit against the arresting state trooper and other authorities.

“We have six police officers. The probability of having the same officer involved in multiple types of incidences is probable,” Prairie View police chief Larry Johnson told NBC News.

“I haven’t seen anything [in the footage of Miller’s arrest] that gave me any cause for concern as far as this officer’s conduct at this point.”

Racially-motivated police brutality reached a boiling point in the United States in August 2014, after unarmed black teen Michael Brown was shot dead by a white officer.

A series of protests followed Mr Brown’s death, as well as vigorous debate on the topic – believed to be a serious issue – in the US.

See a video of the incident below