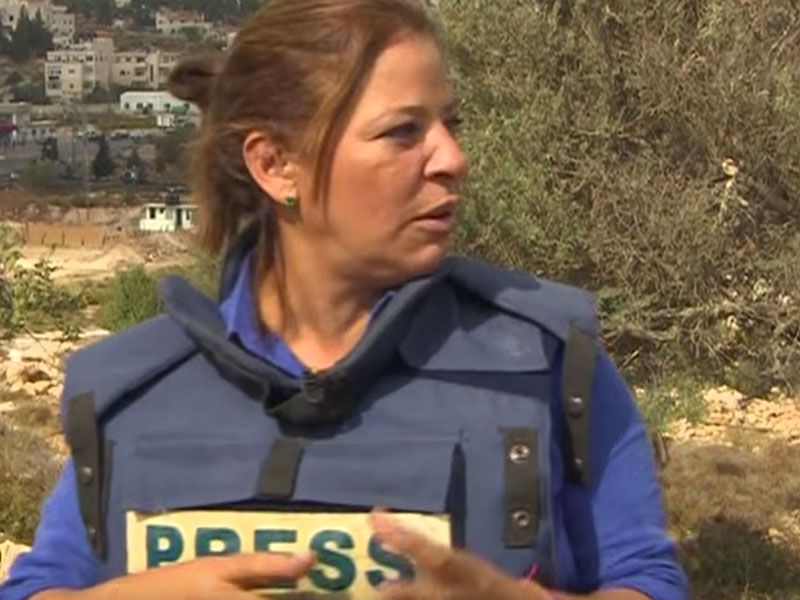 A journalist reporting from the conflict-ridden West Bank has continued broadcasting after being bombarded with tear gas by Israeli troops.

Standing on a barren rise at Beit El, north of Jerusalem in the central West Bank region, Al Jazeera‘s Hoda Abdel Hamid was speaking on youth issues, before telling viewers the crew had been advised to leave the area as Israeli soldiers approached at a distance on a road nearby.

At the same time, a group of men in civilian clothing could be seen running away from the road.

The news team decided to hold their ground, believing they would not be targeted, but footage of the approaching combat vehicle showed it suddenly stop and reposition, aiming the gas launchers straight at them.

Ms Hamid continued to speak to the camera as they were suddenly surrounded by tear gas, gasping for air as she described what was occurring.

It was one of multiple incidents of violence against press representatives since October 1, according to a Palestinian human rights group.

Violence between Israeli forces and Palestinian demonstrators increased in recent days, following a series of attacks from both sides of the war.

Earlier this month, two Israelis were fatally shot in front of their four children while driving in Palestinian territory, while a Palestinian teenager was shot by Israeli police on Sunday after he allegedly tried to stab another boy – a claim rejected by his family.

The escalated tensions saw at least seven attacks on journalists in the past 12 days.

In one incident, al-Mayadeen correspondent Hana Mahameed was hit in the face with a stun grenade thrown by Israeli forces as she reported live.

“Israel doesn’t want them to report on Israeli attacks – including by the settlers – against Palestinians,” he told Al Jazeera. “And [Israel] doesn’t want the media to cover the protests and show them to the world.”

“If a journalist is in the middle of a violent demonstration with dozens or hundreds of rioters throwing rocks or molotov cocktails, it could be a little bit dangerous,” he said.

Palestinian Red Crescent Society, a humanitarian movement offering medical assistance, also reported an escalation of attacks in the past 12 days.

It said their staff and ambulances were targeted 53 times since October 3, most in occupied Jerusalem.

Correction 10/10/2015: An earlier version of this caption incorrectly located the scene of this video as Beirzeit. This…