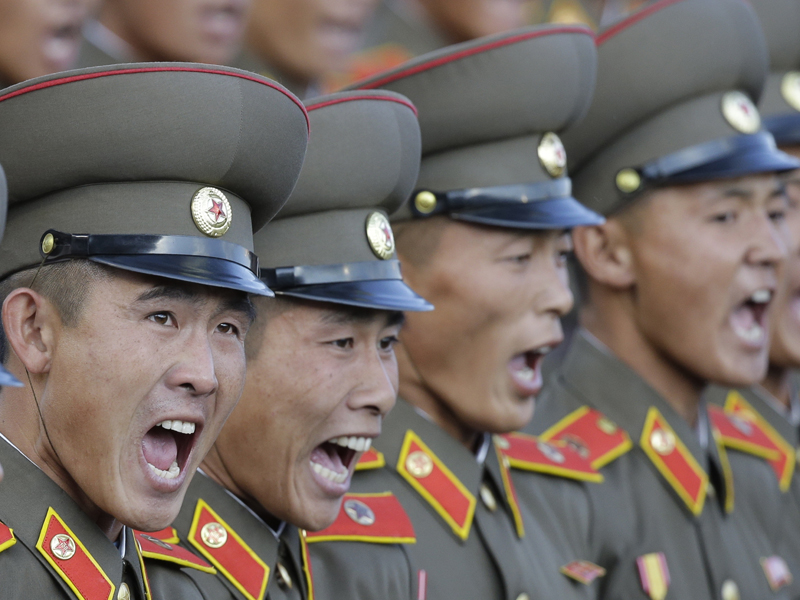 North Korea’s leader Kim Jong-un has used a speech at a major military parade marking the 70th anniversary of the ruling Workers’ Party to say his country is prepared to fight “any kind of war waged by US imperialists”.

“Our party dauntlessly declares that our revolutionary armed forces are capable of fighting any kind of war provoked by the US and we are ready to protect our people and the blue sky of our motherland,” he said.

Thousands of goose-stepping soldiers in tight formations marched into Pyongyang’s Kim Il-sung square for the parade, alongside a cavalcade of tanks, armoured vehicles and assorted ballistic hardware.

Kim, the third generation of a family dynasty that has ruled the North with absolute authority for the past seven decades, took salute from the massed military ranks.

His words were met with rapturous applause from tens of thousands of flag-waving spectators, while above the square, a large banner slung from a gas-filled balloon read: “Long live the invincible Workers’ Party of Korea.”

The DPRK (North Korea) is willing to make efforts to improve relations between the North and the South and safeguard the stability of the peninsula.

Liu Yunshan, the fifth most powerful man in China’s ruling Communist Party, stood by Mr Kim during the parade.

An overnight thunderstorm and light rain in the morning threatened to put a dampener on the parade, which has been in the works for months.

Mr Kim paid tribute to his family’s legacy on Friday with a midnight visit to the Kumsusan Palace of the Sun, which serves as the mausoleum for his father Kim Jong-il and grandfather Kim Il-sung, North Korea’s founding leader.

As night fell after the parade, a tribute to the ruling party that has served at the whim of three generations of the Kim dynasty, the skies of Pyongyang were lit up with a fireworks display over the banks of the Taedong River.

On the ground, roaring crowds held up their coloured squares to create huge images of Worker Party flags and spelling out Mr Kim’s name.

As with similar displays in the past, the event was closely watched for glimpses of any new hardware that might signal a forward step in the North’s military development.

North Korea has conducted three nuclear tests and threatened a fourth as part of a nuclear weapons and missile program that it has pursued through a barrage of international sanctions.

There is debate among experts as to how far it has come in developing those weapons, especially the ability to shrink nuclear warheads so that they can fit on a missile.

An exhaustively researched report published this week by the US-based Institute for Science and International Security estimated that North Korea had between 10 and 16 nuclear weapons as of the end of 2014.

The report argued it was likely the country could already build a warhead to fit atop a Nodong missile — with a range of less than 1,300 kilometres — but added that the reliability of such a weapon was open to question.

Months of planning and preparation have gone into the parade, involving a mass mobilisation of state personnel and resources to ensure its success.

The capital itself was given a comprehensive makeover — its streets lined and decorated with giant posters, red banners and national flags, many of them displaying the numerals “10-10” in reference to the ruling party’s official October 10 birthday.

The North excels at such choreographed displays of military muscle, which aim to boost pride and patriotism at home.

At the same time, it sends a defiant message to an international community that has sought, without success, to pressure Pyongyang into abandoning its nuclear weapons ambitions.

But the attendance of just one Chinese official reflects North Korea’s diplomatic isolation.

Mr Kim and Mr Liu met for talks on Friday, during which the Chinese official delivered a letter from president Xi Jinping, and voiced Beijing’s willingness to work with Pyongyang on resuming multi-party talks on its nuclear program.

“The DPRK (North Korea) is willing to make efforts to improve relations between the North and the South and safeguard the stability of the peninsula,” Xinhua reported the young leader as saying.

Kim Jong-un ready for war with US