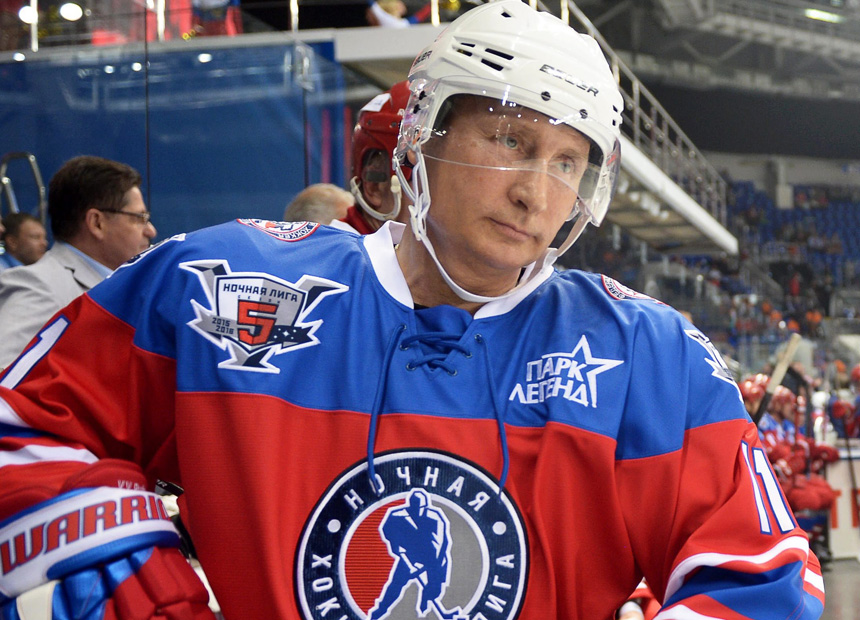 Mr Putin took to the rink to mark a new season of the Night Ice Hockey League in the winter Olympic city of Sochi.

“Those who are moving with eyes on a victory, will certainly score it,” Mr Putin said in televised remarks.

• Russia fires volley of cruise missiles into Syria
• Putin, Obama share the frostiest handshake ever
• Putin wants you to know he has muscles, big ones

Mr Putin was handed a medal at the end of the match for his “contribution to hockey in Russia,” reported Associated Press.

The macho-man leader helped set up the competition.

Russian business tycoons and officials like Gennady Timchenko and Arkady Rotenberg shared the ice with the President.

Both of those men were sanctioned by the West after Mr Putin annexed Crimea in 2013.

The game also marked Mr Putin’s 63rd birthday, which was cause for widespread celebration around the country.

Supporters sang his praises, comparing him to a range of heroic figures from Buddha to Batman.

Russian and Italian footballers played a match in Putin’s honour in the city of Grozny.

Rapper Timati released a song and video praising the return of his “best friend” to the world stage.

“He is in charge, so everything will be according to plan,” the lyrics say.

“My best friend is back in the game.”

The video shows Timati performing in front of the Kremlin, surrounded by black-clad skateboarders with Putin masks.

Supporters also rolled out a new exhibition of flattering paintings, depicting Putin in various heroic guises, including the black-clad Matrix protagonist Neo, the Buddha in lotus position, Che Guevara in his black beret and Mahatma Gandhi.

“Vladimir Putin’s character is the embodiment of heroism, fairness, slyness, intellect, courage and charm,” the exhibition organisers said in a statement.

The Kremlin said Putin had received “numerous” birthday greetings, including from the heads of Kazakhstan, Belarus, Armenia and Azerbaijan.

The celebrations come as Russia opened air strikes in Syria and Mr Putin made his first address to the UN in almost 10 years.