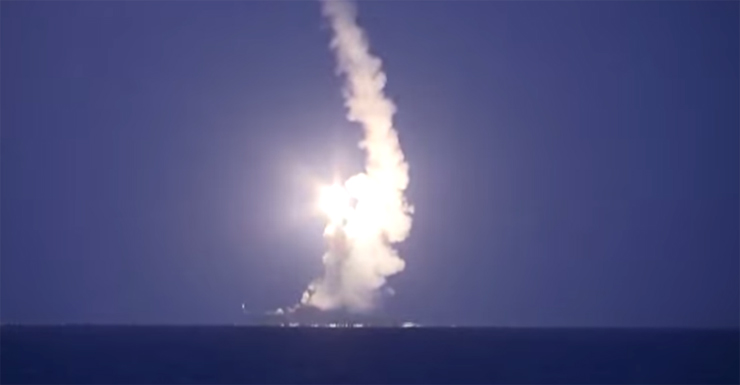 Russian warships have joined in strikes in Syria with a volley of cruise missile attacks, as Russian president Vladimir Putin pledged his air force would back a ground offensive by government forces.

Mr Putin and his defence minister, Sergei Shoigu, said the strikes targeted Islamic State militants, with the president stressing the need for cooperation with a US-led coalition.

“In addition to the air force, four warships of the Caspian flotilla have been involved,” Mr Shoigu said, adding that the warships had carried out 26 cruise missile strikes against 11 targets.

The defence minister said Russian forces had struck 112 targets in Syria since last week launching a bombing campaign that Moscow says is targeting the IS group.

On Wednesday (local time), the Syrian Observatory for Human Rights claimed Russia and Syria carried out what appeared to be a major coordinated assaults on Syrian insurgents, targeting rebels in the west rather than IS militants.

Iraq leans toward Russia in war on Islamic State

Western countries, Arab states and Turkey, who are waging their own bombing campaign against IS, say Moscow is using the militant threat as a pretext to target president Bashar al-Assad’s domestic foes.

Russia says the Assad government should be the centrepiece of international efforts to combat extremism.

Mr Shoigu said Russia was ready to agree a document with the United States to coordinate actions in Syria.

US defence secretary Ash Carter, however, said it would not cooperate militarily with Russia’s “tragically flawed” strategy in Syria but was prepared to carry out basic, technical discussions on pilot safety.

“We are not prepared to cooperate in a strategy which as we explained is flawed, tragically flawed on Russia’s part,” Mr Carter said during a trip to Rome, renewing US accusations that Russia’s strikes were not focused on Islamic State militants.

Russia’s drive for more clout in the Middle East includes a new security and intelligence-sharing agreement with Iran, Iraq and Syria with a command centre in Baghdad.

Iraq’s head of parliament has now hinted it soon might request Russian air strikes against Islamic State on its soil and wanted Moscow to have a bigger role than the United States in the war against the militant group.

“In the upcoming few days or weeks, I think Iraq will be forced to ask Russia to launch air strikes, and that depends on their success in Syria,” Hakim al-Zamili, a leading Shiite politician, said.

In Turkey, the prime minister said he did not want the conflict in Syria turning into a crisis between Russia and NATO, nor into a Russian-Turkish dispute.

Ahmet Davutoglu said his nation, a member of the NATO alliance, “will not make any concessions in the context of our border and air space security”, in comments broadcast live by state television.

Mr Davutoglu said only two of Russia’s 57 air strikes in Syria have hit Islamic State, while the rest have been against the moderate opposition, the only forces fighting IS in north-western Syria.

A spokesman for Turkey’s ruling AK Party said the nation would view further violations of its air space as a threat, but welcomed a Russian offer to meet and discuss the issue.

“Russia is a friend, but if the repeated incursions continue, we will perceive it as a threat and not as friendly behaviour.”