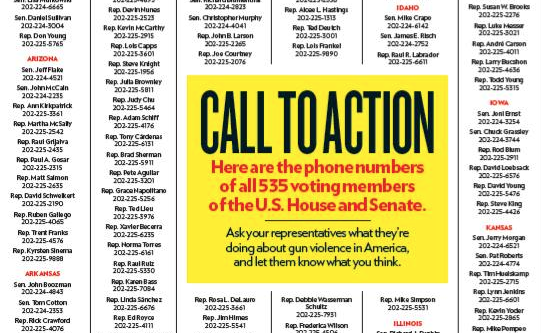 PEOPLE Magazine has urged its readers to contact their members of congress by including all 535 phone numbers in its latest issue.

Editorial director Jess Cagle used his editor’s letter to express frustration over continued gun violence in the country, and the lack of change prompted by mass shootings.

In light of the most recent shooting, Mr Cagle wrote, “We all ask ourselves the same questions: How could it happen again? What are we doing about gun violence in America?”

“As a country we clearly aren’t doing enough, and our elected officials’ conversations about solutions usually end in political spin.”

According to Gun Violence America, this year over 10,000 Americans have died from gun-related deaths.

On Monday in the US, an 11-year-old boy shot his eight-year-old neighbour dead for refusing to show him her puppy.

The next day, an 11-year-old boy accidentally shot and killed his 12-year-old brother in a separate incident.

In the past 1004 days in the US, there have been 994 mass shootings – defined as four or more people shot in the same incident – in the US.

“I think about mass shootings when I’m on a train, and when the lights go down in a movie theatre, and when I see children in a classroom,” wrote Mr Cagle.

Posting the phone numbers all 535 congress members, which are readily available to the public, was not in itself a bold move for PEOPLE.

Dedicating this week’s magazine to the issue of gun violence is though, especially for a tabloid typically devoted to celebrity news.