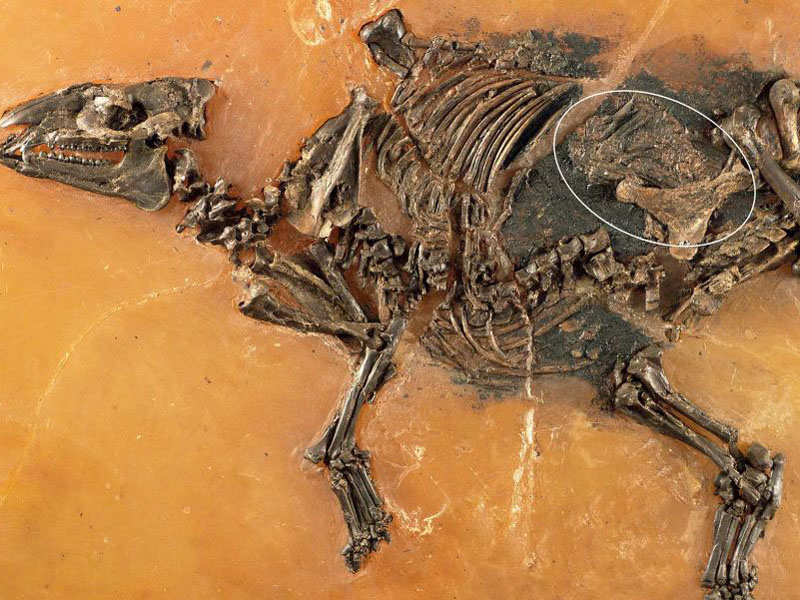 A 48-million-year-old horse predecessor, whose exceptionally well-preserved remains were discovered in Germany, still has its foetus and some soft tissues intact, researchers have confirmed.

The discovery of the horse was announced at last year’s Society of Vertebrate Paleontology annual meeting, but the new study confirms that the preserved soft tissues, which include the mother’s placenta and a uterine ligament, represent the earliest fossil record of the uterine system of such an animal.

The findings are published in the latest issue of the journal PLOS ONE.

“The foetus is the earliest and best-preserved fossil specimen of its kind,” wrote lead author Dr Jens Lorenz Franzen from the Senckenberg Research Institute Frankfurt and his colleagues.

They used scanning electronic microscopy to analyse the remains, which were found at a quarry in Messel, near Frankfurt.

The extremely high magnification revealed the 12.5-centimetre-long foetus, which retains almost all of its tiny bones. Only its skull was damaged, having been crushed at some point.

The researchers believe the mare, from the species Eurohippus messelensis, died shortly before giving birth. They do not, however, think that her death was related to her pregnancy. The cause of her demise is a mystery so far, although it is thought that many prehistoric animals perished at the site as a result of asphyxiation.

Lake Messel, present during the mare’s lifetime, is known to have released toxic carbon dioxide gas from time to time due to volcanic activity. This might have caused the death of the mother, who perhaps sought water as she was about to deliver.

Evolution of reproduction in horses

Eurohippus messelensis was only first described in 2006. The now-extinct species was smaller than today’s horses, being only about the size of a fox terrier, and had toes: four on its front ‘feet’ and three on its back ones.

Dr Franzen and his colleagues were able to reconstruct the position of the foetus as it would have been when its mother perished.

They found that the positioning “was normal and corresponds to late gestation of modern horses”.

The scientists conclude that the reproductive system of today’s horses was already highly developed at this early time in the Paleocene Era. The mode of reproduction could have even evolved much earlier.

Humans are also placental mammals, so it will be interesting to see how far back this form of birth goes. It clearly predates the common ancestor of the predecessors of horses and humans, but by precisely how many years remains unknown.