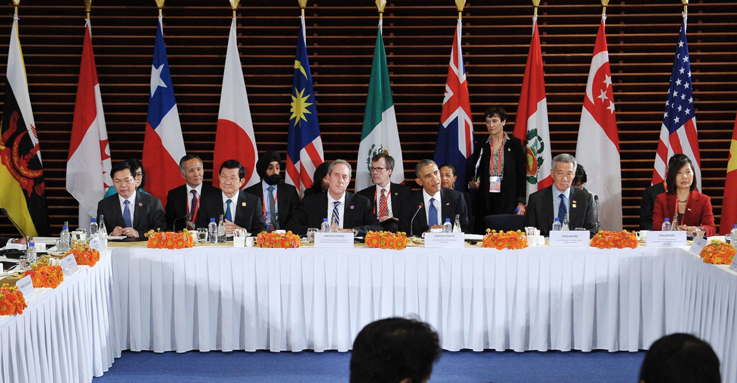 Australia and 11 other nations have finally agreed on a major Pacific trade deal.

The announcement came on Monday morning (AEDT) after last-minute negotiations in the US city of Atlanta.

The Trans-Pacific Partnership would account for 40 per cent of the world’s gross domestic product (GDP) and was touted as an agreement that could transform a variety of industries.

It would create the largest free-trade zone in the world, with Australian Trade Minister Andrew Robb telling Sky News it was “by far the biggest global deal in 20 years”.

• What exactly is the TPP?
• ‘Impasse’ could derail TPP
• Labor digs in on penalty rates

“We have set Australia up for massive diversification,” Mr Robb said.

“This one is very large … it is a great compliment to the other three agreements we’ve struck, the trifecta of South Korea, Japan and China.

“Not only have we got a greater diversity of countries involved, we have a greater depth and breadth of opportunities.”

Mr Robb denied suggestions climate change action would be affected by the TPP.

The talks went four days past deadline to resolve conflicts over Canada and Japan opening up their dairy markets to New Zealand exports, and objections from Australia, Peru and Chile to the US push for longer biologic patent protections.

US president Barack Obama said the TPP “levelled the playing field” for farmers and manufacturers “by eliminating more than 18,000 taxes that various countries put on our products”.

“It includes the strongest commitments on labour and the environment of any trade agreement in history, and those commitments are enforceable, unlike past agreements,” Mr Obama said in a statement.

“After five years of intensive negotiations, we have come to an agreement that will create jobs, drive sustainable growth, foster inclusive development, and promote innovation across the Asia Pacific Region,” said US Trade Representative Michael Froman.

Mr Robb had said before the deal was sealed that American “biologics” rules remained a live issue in the negotiations.

The US allows pharmaceutical companies an exclusive period of 12 years to use clinical data behind the approval for a new biological drug, and were pushing for that in the TPP.

But Mr Robb said he would not move further than five years, despite the US wanting an compromise eight-year period.

In the end, Mr Froman said the deal would offer at least five years’ protection for biologic drugs.

It’s tipped to be months before the final document’s draft is finished. The legislative bodies of each nation will then need to ratify the agreement.

The TPP could be active as early as next year, provided the parliaments of each member nation ratify the deal.