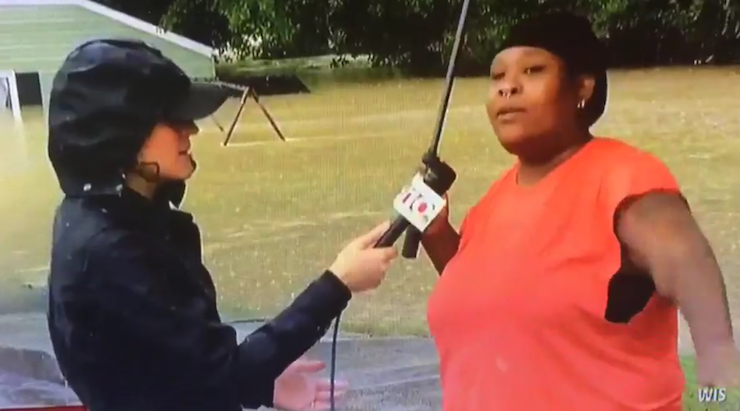 There was only one unusual item an American flood victim wanted to save from her inundated home – pizza.

As a record downpour left large areas of the southeast US under water, destroying homes and infrastructure, a moment of brutal honesty has emerged.

Asked what she picked up as she escaped her house, Angela Williams have this response to WIS10 News.

“I grabbed nothin’ but two Totino pizza out of the refrigerator and my doggie,” Ms Williams said.

“And we left. That’s it. I tried to grab some other things but they wasn’t even worth it.”

“You’re smilin’ about it now but for people who are watching these images on scene, I mean I just appreciate your heart because I think that what you’re saying is, we’re live, this is all I had time to get and this is where we are,” reporter Sam Bleiweiw then said.

@totinos whatever you do during a flood, make sure you don’t leave your TOTINOS pizza behind pic.twitter.com/3ymqv2WYoG

North and South Carolina have been worst hit, and experts say the deluge is not over.

Earlier, President Barack Obama declared a state of emergency in South Carolina and said federal aid would support state and local efforts as flood warnings remained in for many parts of the East Coast through to Sunday.

The National Weather Service warned of “potentially historic and life-threatening flooding” across the southeast of the United States.

“The threat for widespread, catastrophic flooding will continue across parts of the southeast, as tropical moisture feeding into an area of low pressure produces moderate to heavy rainfall across the region,” it said.