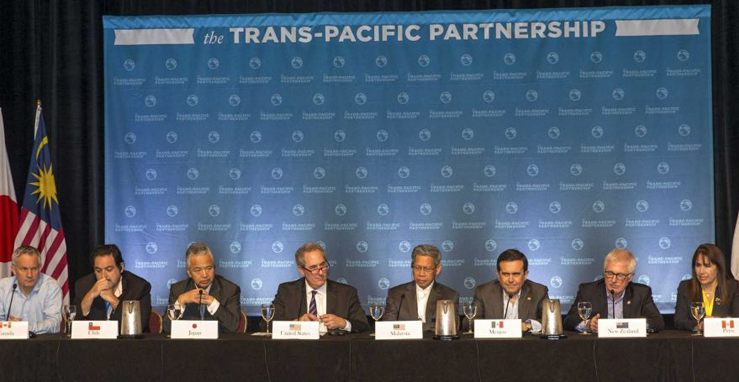 Pacific nation ministers and negotiators are scrambling to lock in a major Pacific trade deal, as talks come to a head in the US city of Atlanta.

Negotiations over the 12-country Trans-Pacific Partnership, which would cover 40 per cent of the global economy, are continuing into another night after five days of marathon talks.

A ministerial press conference was originally scheduled for this morning, Australian time, as reports emerged of a deal between Australia and the United States on intellectual property rules for new-generation medicines.

Australia’s refusal to concede ground to the US on so-called “biologics” has held up talks for days.

But the press conference has been pushed back indefinitely as talks drag on, and Australian Trade Minister Andrew Robb told reporters on the ground that biologics remain a live issue in the negotiations.

In an earlier statement, Minister Robb said there is 50 per cent chance the Trans-Pacific Partnership trade deal would be agreed today.

Data exclusivity broadly means the time period companies have before they are forced to release information about how to make new medicines.

Once that information is released, it can be used by other companies to make cheaper generic versions of the drug.

The United States allows pharmaceutical companies an exclusive period of 12 years to use clinical data behind the approval for a new biological drug, and were pushing for that in the TPP.

Mr Robb will not move further than five years, despite the US pushing for a compromise eight-year period.

“Australia’s current arrangements … are completely adequate and any proposed changes are non-negotiable, this is a red line issue for us,” he said.

It is claimed any extension of the data provisions could hit the health budget, but other countries at the negotiating table have expressed concerns at the delay.

Japan’s economic minister Akira Amari warned it could be the “last chance” of getting a deal.

The ABC understands progress has been made in industries like beef, horticulture, wine, seafood, grains but negotiations over dairy and sugar remain unresolved.

“So, that was our starting point going into negotiations,” he said.

However, he said, the TPP would be “great” for Australians in the long-run.

The Obama administration had previously proposed lowering the threshold to seven years, but has pushed a proposal for an eight-year minimum in the TPP talks.

Australia — along with others such as New Zealand and Chile — has been unwilling to offer more than five years protection for the medicines, because longer terms would increase the cost of state-subsidised medical programs.

Drug companies argue a longer period is needed to create an incentive for developing treatments for diseases such as cancer and arthritis.

The Obama administration has been the prime driver behind the TPP, to create a foundation for “21st century trade rules,” setting standards on trade, investment, data flows and intellectual property that eventually non-TPP members — particularly China — will have to accept.

TPP deal may be signed on Mon