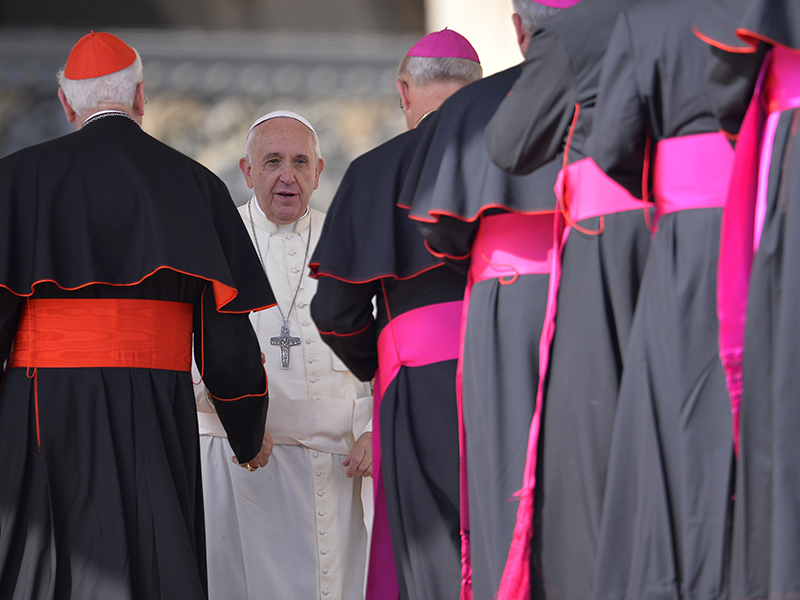 Pope Francis has opened a gathering of bishops intended to review Catholic teaching on the family against a backdrop of controversy over the thorny and divisive issue of homosexuality.

The Church’s second synod on the family opened in a tense atmosphere the day after a senior priest announced he was gay and accused the Vatican of “institutionalised homophobia”.

With Pope Francis having also been dragged into the United States’ debate over gay marriage, the synod appears as if it has been called solely to address the question of the Church’s approach to gay and lesbian believers.

The Vatican reacted furiously to Polish priest Krzystof Charamsa’s “very serious and irresponsible” declaration of his sexuality, saying he would be kicked out of his post as a theologian.

Flanked by his boyfriend, Mr Charamsa told a news conference in Rome on Saturday that he had felt compelled to speak out.

“I want to be an advocate for all sexual minorities and their families who have suffered in silence.”

According to Mr Charamsa, most Catholic priests have a homosexual orientation but are so consumed by self-hatred that they support the repression of their basic instincts and desire for love.

Mr Charamsa timed his announcement to ensure maximum media impact on the eve of the opening of a synod that is the second and final round of a review of Catholic teaching on the family.

The Vatican hit back by saying “the decision to make such a pointed statement on the eve of the opening of the Synod appears very serious and irresponsible, since it aims to subject the Synod assembly to undue media pressure”.

Even before the Polish priest’s initiative, Catholic attitudes to sexuality were dominating headlines.

The Vatican confirmed on Friday that Francis had hugged an old gay friend and met his partner during his recent visit to the United States.

The highly symbolic gesture, indicative of Francis’s personally tolerant attitude towards gays, came a day before he met prominent gay marriage opponent Kim Davis – another private encounter in the US that the Vatican said did not indicate support for her stance.

Last year’s first round of the synod also caused controversy when reformers attempted to push through a statement that loving same-sex relationships had qualities that the Church should recognise.

After a backlash from conservatives who regard homosexuality as a kind of sickness, that groundbreaking phrase was excised from the final conclusions.

Official Catholic doctrine holds that homosexuality is an “intrinsic disorder”, but progressive theologians have recently come to accept that sexuality is innate, a premise that makes it harder to maintain a stance of outright condemnation.

Even senior clerics admit the synod could expose deep fissures in the Church – although those with long memories also recall that this situation is hardly unprecedented.

“We are at sea, in choppy waters even,” Lorenzo Baldisseri, the cardinal who serves as Secretary General of the synod, told reporters last week.

At the heart of the synod’s agenda is Francis’s belief that the Church must demonstrate mercy in its attempt to address the gulf between what it currently says about marriage, love and sex and what tens of millions of its followers actually do every day.

In practical terms, that is most clearly articulated in a demand for Catholics who have divorced and remarried to be allowed to take communion and confess their sins, rather than being de facto excluded from the Church as they currently are.

Francis appears favourable to change on this issue, saying the Church must tend to the “wounds” caused by family breakdown rather than judging followers in “irregular” situations.

The Argentinian pontiff has personally married couples who had lived together “in sin” and baptised children born to parents married outside of the Church.