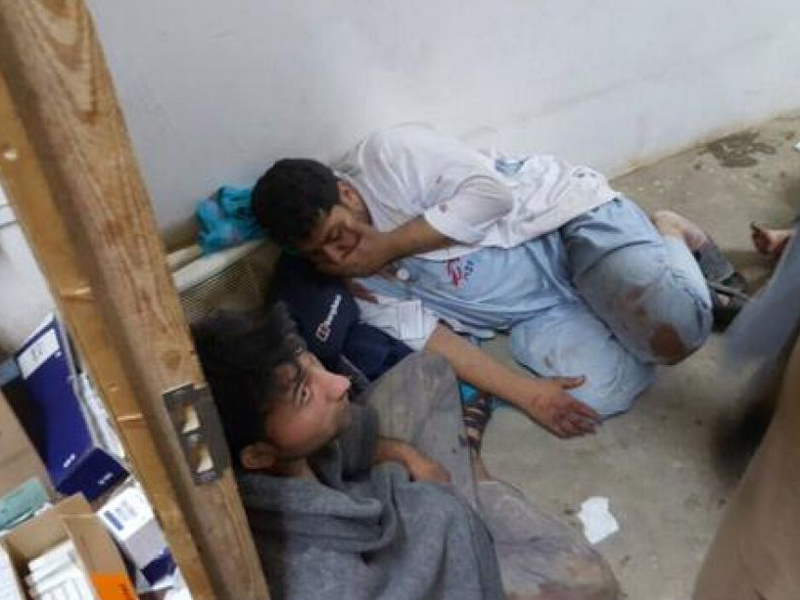 The United Nations has condemned a suspected US air strike on a hospital in the Afghan city of Kunduz that killed 19 people as “inexcusable and possibly even criminal”.

Medecins Sans Frontieres (MSF), also known as Doctors Without Borders, said patients burned to death in their beds during a bombing raid that continued for half an hour after US and Afghan authorities were informed the hospital had been hit.

“Twelve staff members and at least seven patients, including three children, were killed; 37 people were injured,” the charity said.

“This attack constitutes a grave violation of international humanitarian law.”

The air raid came days after Taliban fighters seized control of the strategic northern city of Kunduz, in their most spectacular victory since being booted from power by a US-led coalition in 2001.

Afghan forces, backed up by their NATO allies, claimed to have wrestled back control of the city.

But the defence ministry in Kabul said “a group of armed terrorists … were using the hospital building as a position to target Afghan forces and civilians”.

The charity said despite frantic calls to American and Afghan military officials in Kabul and Washington, the attack continued for another 30 minutes, with the main hospital building housing the intensive care unit and emergency rooms being targeted.

“The bombs hit and then we heard the plane circle round,” said Heman Nagarathnam, MSF’s head of programs in northern Afghanistan.

“There was a pause, and then more bombs hit. This happened again and again. When I made it out from the office, the main hospital building was engulfed in flames.

“Those people that could had moved quickly to the building’s two bunkers to seek safety. But patients who were unable to escape burned to death as they lay in their beds.”

In a statement released by the White House, US president Barack Obama offered his “deepest condolences” for what he called a “tragic incident”.

“The Department of Defence has launched a full investigation, and we will await the results of that inquiry before making a definitive judgement as to the circumstances of this tragedy,” Mr Obama said.

NATO earlier conceded US forces may have been behind the bombing, after forces launched a strike they said was intended to target militants.

“The strike may have resulted in collateral damage to a nearby medical facility. This incident is under investigation,” a NATO statement said.

The incident has renewed concerns about the use of US air strikes in Afghanistan, a deeply contentious issue in the 14-year campaign against Taliban insurgents.

UN rights chief Zeid Ra’ad Al Hussein called for a full and transparent probe, noting “an air strike on a hospital may amount to a war crime”.

“This event is utterly tragic, inexcusable and possibly even criminal,” he said.

MSF said some 105 patients and their caregivers, as well as more than 80 international and local MSF staff, were in the hospital, the only medical facility in the area that can deal with major injuries, at the time of the bombing.

The charity said Afghan and coalition forces were fully aware of the exact location of the hospital, having been given GPS coordinates of a facility it said had been providing care for four years.

“We demand total transparency from Coalition forces. We cannot accept that this horrific loss of life will simply be dismissed as ‘collateral damage’.”

Kunduz is facing a humanitarian crisis, with thousands of civilians caught in the crossfire between government forces and insurgents. At least 60 people are known to have died and 400 wounded in recent fighting.

The Taliban seized on the incident, saying “barbaric American forces … carried out deliberate air strikes on a civilian hospital”.

In a statement, it denied any of its fighters were being treated at the MSF clinic “because the prevailing military situation of Kunduz would not allow us to admit our patients to the said hospital”.

The Islamists’ offensive in Kunduz marks a major blow for Afghanistan’s Western-trained forces.