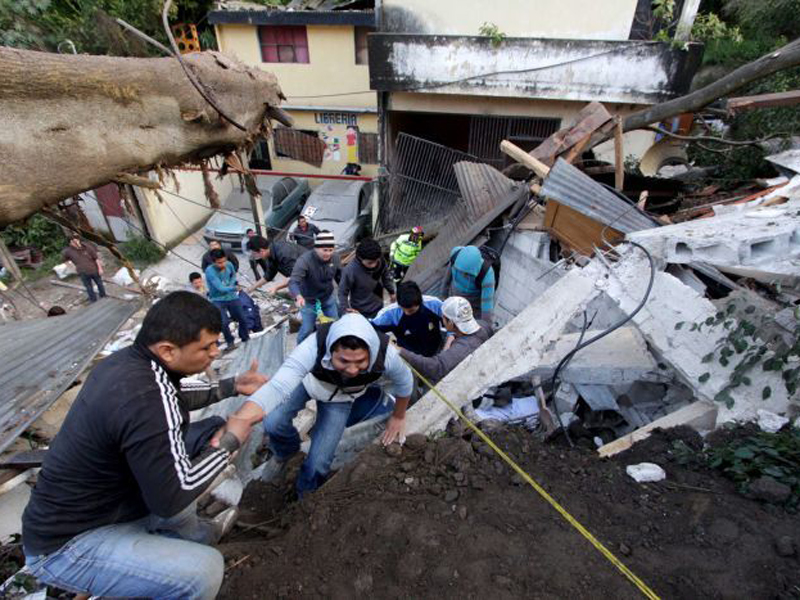 At least 30 people have died and about 600 are missing after a hillside collapsed on a town on the edge of Guatemala City, burying homes in earth and sludge and sparking a desperate hunt for survivors.

Loosened by heavy rains, tonnes of dirt and trees tumbled onto Santa Catarina Pinula in a valley on the south-eastern flank of the capital late on Thursday (local time), flattening dozens of flimsy houses when many residents had gone to bed.

An aerial video on Guatemalan media showed the tree-lined hillside laid bare above earth, foliage and debris covering part of the town, which hugs the side of a river in a deep ravine.

I feel like I’ve lost my loved ones because all my neighbours died.

The victims include at least three children.

Rescue workers removed the dead from the tangle of mangled walls, beds and furniture.

CONRAD head Alejandro Maldonado told a news conference as many as 600 could still be missing after the disaster, which he said hit 125 homes.

Thirty-four people were pulled out alive from the mud and rubble, while 25 others were injured, CONRAD officials said.

“I feel like I’ve lost my loved ones because all my neighbours died,” survivor Melina Hidalgo, 35, said.

She was washing clothes when there was a loud crash and the lights went out. She found neighbouring houses covered in soil and mud.

Felled electricity poles were giving off sparks and crying people searched for children, she said.

My husband is there now shovelling through soil to find our son.

Guatemalan media reported rescuers heard voices under collapsed buildings and soil as they struggled to dig people out.

The landslide was one of the worst in recent memory in the impoverished Central American country. Heavy rains have killed at least eight people this year.

Marta Guitz, 37, returned from work to find her house buried and was unable to reach Dany, her 17-year-old son, who she believed was inside.

“My husband is there now shovelling through soil to find our son,” the domestic worker said as tears welled.

Oscar Raul de Leon and his family abandoned their home and he looked for his cousin but all he found were the remains of the relative’s home.

“I’d prefer to lose my things than any of my children,” he said.

The government said 600 people were helping sift the rubble to pull out survivors while authorities set up a shelter to help people made homeless.