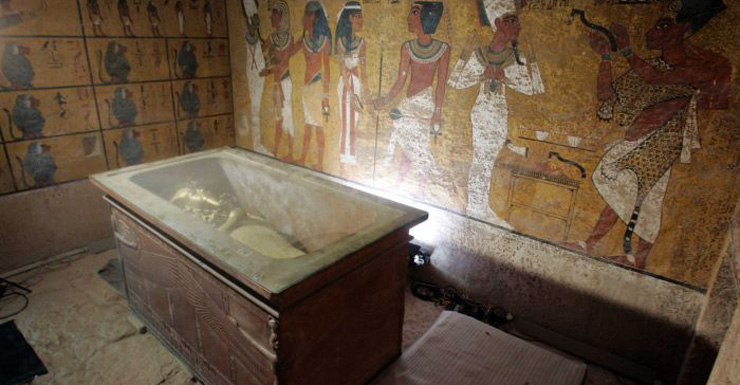 Egyptologists have never discovered the mummy of Nefertiti, a regal beauty who played a major political and religious role in the 14th Century BC.

Dr Nicholas Reeves, from the University of Arizona, has been using radar and thermal imaging technology to examine Tutankhamun’s tomb in the Valley of the Kings in Luxor, southern Egypt.

• How immigration could save us from recession
• Russia bombs US-backed forces, leaves IS alone
• Beloved Simpsons character to come out of the closet

He told a news conference in Cairo that he believes Tutankhamun’s mausoleum was originally occupied by Nefertiti, thought by experts to have been the king’s stepmother.

His theory is that Nefertiti has laid undisturbed behind what he believes is a partition wall for more than 3,000 years.

The archaeologist believes the boy king, who died unexpectedly at 19, was buried in a rush in an underground burial chamber that was probably not intended for him.

King Tutankhamun’s death would have forced priests to reopen Nefertiti’s tomb 10 years after her death because the young pharaoh’s own had not yet been built, Dr Reeves said.

“If it is true, we are facing a discovery that would overshadow the discovery of Tutankhamun himself,” Egyptian antiquities minister Mamdouh al-Damaty told reporters.

“This would be the most important discovery of the 21st century.”

Mr Damaty said the next step would be to carry out radar studies at the site, which could begin in the next one to three months.

King Tut, as he is affectionately known, died around 1323 BC.

His intact tomb, complete with his famous golden burial mask, was discovered in the Valley of the Kings in 1922 by another British Egyptologist, Howard Carter.

Experts have long sought to understand why Tutankhamun’s tomb was smaller than that of other pharaohs and why its shape was more in keeping with that of the Egyptian queens of the time.

Nefertiti was the primary wife of the Pharaoh Akhenaten, who introduced a form of monotheism to Egypt in the 14th Century BC.

Many Egyptologists believe Tutankhamun was Akhenaten’s child with his own sister Kia.

Tut himself is believed to have married his own half-sister Ankhesenamun, one of the six daughters of Akhenaten and Nefertiti.

Nefertiti is believed to have survived her husband and ruled Egypt herself as pharaoh under the name Neferneferuaten.

If her tomb is found intact, it would likely contain hidden treasures and shed new light on a turbulent period rich in artistic and architectural accomplishments.