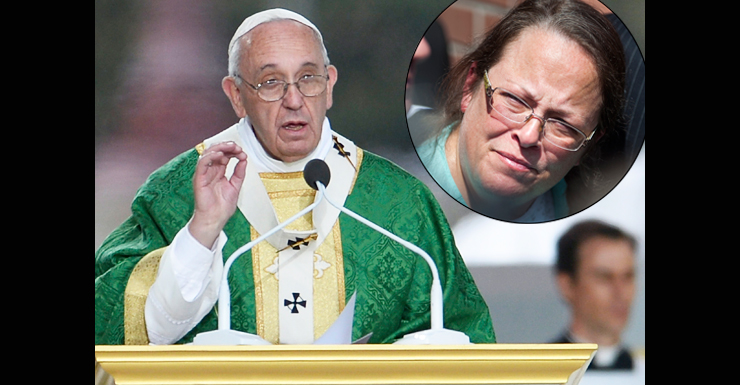 A Kentucky county clerk who had been jailed for refusing to issue marriage licenses to gay couples secretly met Pope Francis during his visit to the United States last week.

Vatican spokesman Federico Lombardi confirmed the encounter with the Kentucky clerk, but declined to comment further.

The county clerk Kim Davis and her husband reportedly met the pope during the Washington leg of his US visit, she and her lawyer told local media.

The pope, returning home from a 10-day trip to the United States and Cuba on Monday, said government officials had a “human right” to refuse to discharge a duty if they felt it violated their conscience.

“He told me before he left, he said, ‘stay strong.’ That was a great encouragement,” Ms Davis said.

Ms Davis said knowing the pope agreed with what she was doing “kind of validates everything.”

“It was really very humbling to even think that he would want to, you know, meet me or know me,” Ms Davis told local media.

“I put my hand out, and he grabbed it, and I hugged him, and he hugged me and he said, ‘Thank you for your courage’.”

With the issue of same-sex marriage dividing Americans, the pope’s meeting with Ms Davis and Pope Francis’ comments may further embolden local officials across the US who have said they will not issue marriage licenses to gay couples.

“Absolutely, I feel the same way. This is a cause worth standing up for,” said Mr Williams, who ordered his deputies in Washington County not to issue any licenses at all since the court’s June decision.

The US Supreme Court made same-sex marriages legal across all 50 states last June.

“It’s nothing short of appalling that the Vatican would turn its back on countless LGBT members and families by lending its support to someone who has brought so much pain to LGBT families,” said Sarah Kate Ellis, president and CEO of GLAAD, a gay and transgender media monitoring group.

However the plaintiffs who sued Ms Davis in federal court indicated the pope’s meeting has no legal effect.

“The pope is not an American citizen, and he is not a member of our government. He is entitled to meet with whoever he likes and have any opinion he wants to have,” Joe Dunman, an attorney representing the plaintiff couples suing Ms Davis, said in a statement.

Pope secretly met one of USA’s most hated Christians