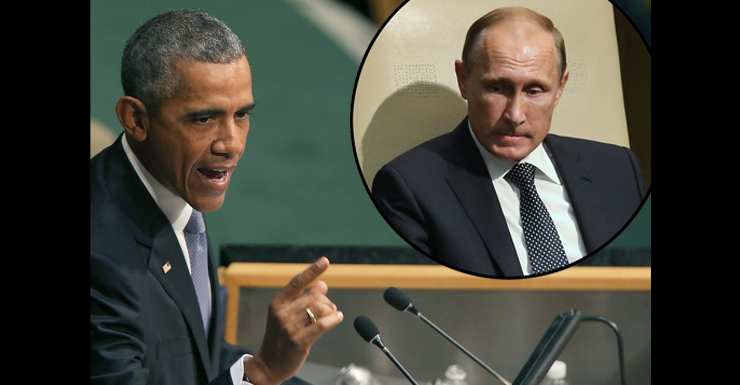 President Barack Obama will wait for the conclusion of the intelligence probe of the hack. Photo: Getty

The leaders of the world’s two superpowers have traded very public rhetorical blows over Russia’s meddling in eastern Europe and the Middle East.

US President Barack Obama used a speech to the UN General Assembly to denounce Russia for giving military support to Syria’s murderous dictator.

He said the US was being asked to support “tyrants” like Bashar al-Assad, which he refused to do.

“When a dictator slaughters tens of thousands of its own people, that is not just a matter of one nation’s internal affairs.”

Russia and Iran have argued that world powers should support Bashar al-Assad’s regime, at least until Syrian forces manage to defeat the Islamic State jihadist group.

The US President did offer to work with Russia to end the “carnage” in Syria and to push back Islamic State terrorists, but ruled out any support for Assad.

“[W]e cannot stand by when the sovereignty and territorial integrity of a nation is flagrantly violated. If that happens without consequence in Ukraine, it could happen to any nation gathered here today,” he said.

When Mr Putin took to the podium an hour later, he rebutted the US leader, saying it was an “enormous mistake to not co-operate with the Syrian group”, which he claimed was “valiantly” fighting Islamic State.

“We must acknowledge that nobody other than President Assad’s armed forces are truly fighting the Islamic State and other terrorist organisations in Syria.”

A “broad coalition” was needed to fight the terrorist group, Putin said.

He likened the coalition to the “anti-Hitler” alliance that fought together during World War II and said Muslim countries “should play a key role.”

“We must address the problems that we are all facing and create a broad anti-terror coalition.”

The pair were later sighted clinking flutes at a special lunch. Putin smiled as their glasses touched. Obama remained grim-faced.

Foreign Minister Julie Bishop also attended the function, which was hosted by UN Secretary-General Ban Ki-moon for the heads of delegations.

– with Jackson Stiles and AAP