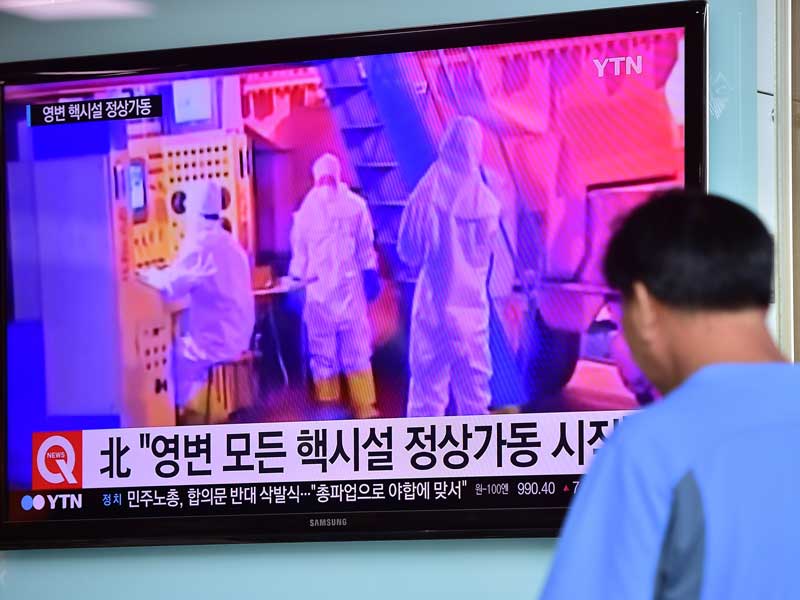 North Korea has restarted a nuclear reactor, seen as its main source of weapons-grade plutonium, raising concern over its nuclear and ballistic missile programs.

The confirmation, by the head of the North’s Atomic Energy Institute, came hard on the heels of suggestions by the chief of the national space agency of a possible satellite rocket launch next month.

In an interview with the North’s official KCNA news agency on Tuesday, the director of the AEI said all facilities at the Yongbyon nuclear complex, including a five-megawatt reactor, had “started normal operations”.

North Korea mothballed the Yongbyon reactor in 2007 under a six-nation aid-for-disarmament accord, but began renovating it after its last nuclear test in 2013.

When fully operational, the reactor is capable of producing around six kilos of plutonium a year – enough for one nuclear bomb, experts say.

The AEI director said scientists had been “steadily improving” both the quality and quantity of the North’s nuclear deterrent and he issued a by-now standard warning to the United States.

“If the US and other hostile forces persistently seek their reckless hostile policy … (North Korea) is fully ready to cope with them with nuclear weapons any time,” he said.

The warning followed strong hints from Pyongyang that it is considering a satellite rocket launch to mark the 70th anniversary of the founding of the ruling Workers’ Party of Korea on October 10.

“The world will clearly see a series of satellites … soaring into the sky at the times and locations determined by the WPK central committee,” the director of the North’s National Aerospace Development Administration said late on Monday.

The North insists its rocket launches are intended to put peaceful satellites into orbit. The US and its allies see them as disguised ballistic missile tests.

North Korea’s main diplomatic ally China has protected it from tougher sanctions over its nuclear and missile tests, but is seen as increasingly impatient with its provocative behaviour.

Some analysts pointed to Chinese President Xi Jinping’s scheduled state visit to the United States later this month as a reason for the North’s recent statements.

“The North always wants the attention of the global community and knows that flagging its weapons programs is one way to get it,” Koh said.

South Korea, the United States and Japan all warned on Tuesday that any fresh launch would violate UN resolutions banning the North from using ballistic missile technology.

Urging Pyongyang to refrain from what would be a “serious act of provocation”, Seoul said it would not hesitate to press the UN Security Council for “a quick and effective response”.

At the same time the South’s defence ministry stressed that no activity had been observed to suggest a rocket launch was imminent.

Recent satellite images show the North has carried out significant upgrades of facilities at its main Sohae satellite launch station.

North Korea ready to use nuclear weapons ‘any time’