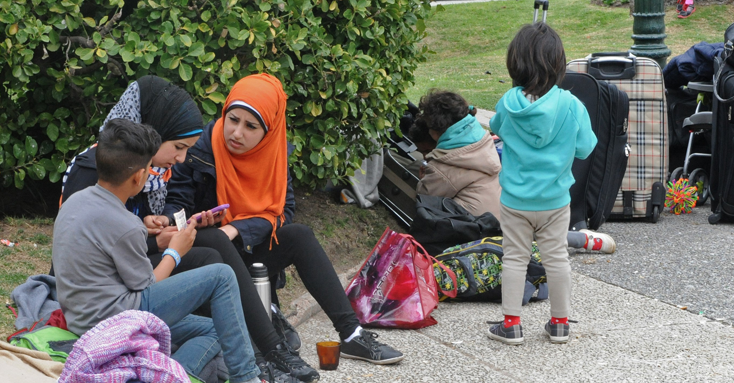 Syrian refugees living in Uruguay are protesting to demand they receive help leaving the country they deem “too expensive” with “scant economic opportunity”.

Uruguay welcomed the group of 42 refugees from Syria in October 2014, however the five families now say officials promised more than they have provided, reported Associated Press (AP).

“There’s no future for us here. The government’s aid plan lasts two years, and one has passed by,” Ibrahim Al Mohammed told AP.

“I have a wife and three young sons,” he said. “What will I do to earn a living when the help runs out?”

Mr Al Mohammed says his wage of $A546 a month, just above the country’s minimum wage, is not enough to get by.

One of the families previously tried to travel from Uruguay to Serbia, but was held for 23 days at Istanbul Airport and then sent back to the South American nation.

The refugees are protesting at Independence Square in the capital Montevideo.

“I understand them. They realise that leaving Uruguay is very hard and that creates a great deal of insecurity,” said head of Uruguay’s Human Rights Secretariat Javier Miranda.

“But the travel document that Uruguay gave them is valid. What we can’t do is force third countries to accept it because it’s out of our reach.”

Mr Miranda defended the refugee program in his country and hope Syrians could have a dignified life in Uruguay.

He acknowledged the country was costly, and that this was the same for all of its citizens.

Since civil war broke out in Syria in 2014 more than four million people have fled from the nation, representing the biggest refugee crisis in nearly 25 years, according to the United Nations.

Syrian refugees in Uruguay want out of ‘expensive’ nation