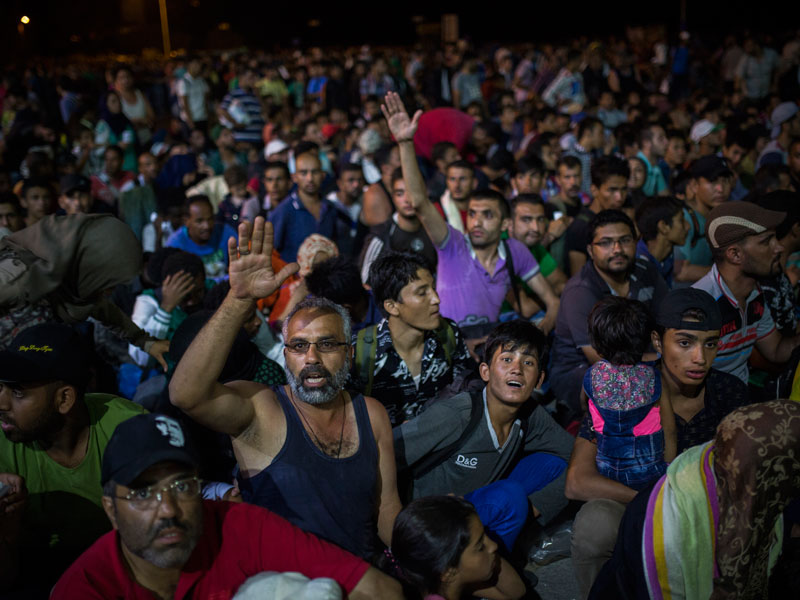 The Abbott government wants to restrict any intake of Syrian refugees to minorities which are largely Christian, as passions run high in the Coalition over the way Australia should handle the crisis in Syria.

Prime Minister Tony Abbott is under increasing pressure to increase this year’s humanitarian intake of 13,750 people, but has put off a decision while Australia consults with the United Nations about the best approach.

Labor is pushing for an additional intake of 10,000 people, while the Greens want double that number.

Beyond the debate over numbers there is an argument over what kind of refugees should be accepted.

Government ministers, like Malcolm Turnbull, have argued for accepting more Syrian Christians, and Foreign Minister Julie Bishop has nominated minorities like the Yazidis.

One backbencher told the ABC the message being sent to the Prime Minister by some in the Coalition was clear: “No more Muslim men.”

Mr Turnbull said on Monday he was very concerned about the plight of Christian communities in Syria.

“They are a minority, they survived in Syria, they’ve been there for thousands of years, literally since the time of Christ,” he said.

“But in an increasingly sectarian Middle East, you have to ask whether the, the gaps, the spaces that they were able to live and survive in will any longer be available.”

Senate Leader Eric Abetz has also highlighted the case for Christians to be prioritised.

“It should be on the basis of need and given the Christians are the most persecuted group in the world, and especially in the Middle East, I think it stands to reason that they would be pretty high up on the priority list for resettlement.”

Ms Bishop told AM the Government was looking at the best way to offer both temporary and permanent protection options for those fleeing the crisis.

“I think that Christian minorities are being persecuted in Syria and even if the conflict were over they would still be persecuted,” she said.

“So I believe there will be a focus on ensuring we can get access to those persecuted ethnic and religious minorities who will have no home to return to even when the conflict is over.

“That includes Maronites, it includes Yazidis, there are Druze, there are a whole range of ethnic and religious minorities that make up the populations in both Syria and Iraq.”

Labor has joined refugee groups in warning the Government’s emphasis on helping Christian refugees is “dangerous”.

Refugee Council chief executive Paul Power said it is “natural” to expect a large number of refugees will be Christian, but he said the focus on the group is likely to do damage.

“I’m sure one of the consequences is that extremists within Syria and other parts of the Middle East will use this as a weapon against Syrian Christians,” Mr Power said.

“They would use it as an argument to push the view that the west cares about Christians and does not care about Muslims and other religious minorities.”

In Tuesday morning’s party room meeting, Coalition MPs suggested the Government fast-track a planned increase in the number of refugees it accepts.

MPs, including Tasmanian Brett Whiteley, told the party room community sentiment around the Syrian crisis had “changed” and the public wanted the Abbott government to act.

The ABC understands some MPs raised the prospect of the Government bringing forward its plan to increase the refugee intake to 18,750, which according to current policy is not due until 2018.

It is understood Immigration Minister Peter Dutton will brief the national security committee tonight about his meetings in Europe on the issue.

Cabinet will discuss the issue tomorrow morning and there is a suggestion the party room may meet again before an announcement is made.

Speaking from Europe, Mr Dutton said he would hold talks with the United Nations refugee agency and other organisations on how Australia could help.

“There’s more to be done and the Australian Government’s very keen to have discussions with the UNHCR, with our partners otherwise, to look at what more we can do,” he said.

“We’ll be focusing our attention particularly on the families who are in the refugee camps along the border of Lebanon, Jordan, Turkey.”

Refugee intake may be limited: government