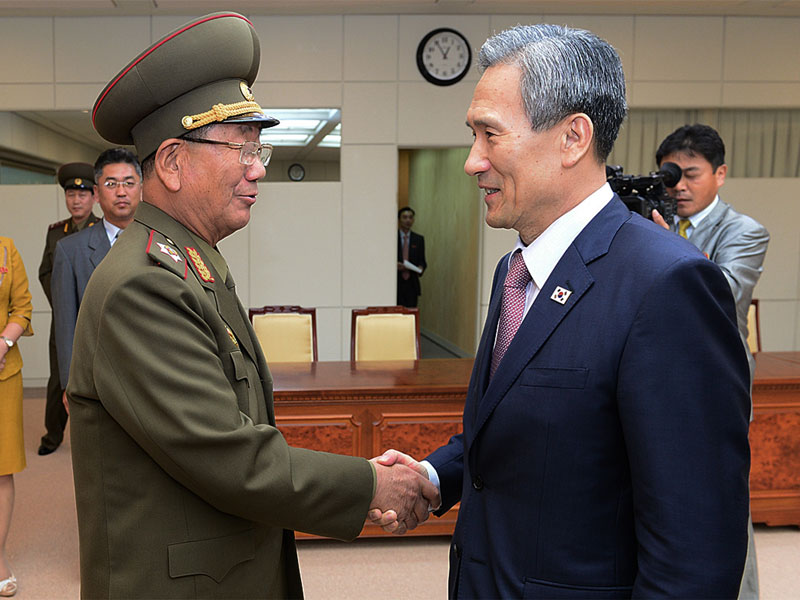 North Korea and South Korea have agreed to ease tensions, after animosity between the states saw them gather their military power.

As the marathon talks progressed over the weekend, North Korea reportedly deployed about 70 per cent of its submarine fleet, while US and South Korean jets continued to fly simulated bombing runs.

The joint accord, signed by the two countries on Tuesday, includes a guarantee from Seoul to turn off loudspeakers blasting high-decibel propaganda across the North Korean border, in light of Pyongyang having “expressed regret” at the maiming of two South Korean soldiers injured in mine blasts.

The speakers will be silenced about 1pm (AEST), with North Korea subsequently lifting a “quasi-state of war” declared last week.

“It is very meaningful that from this meeting, North Korea apologised for the landmine provocation and promised to work to prevent the recurrence of such events and ease tensions,” South Korean presidential national security adviser Kim Kwan-jin said in a televised briefing.

The accord also kickstarted a reunion program to connect families separated in the 1950-53 Korean War.

“They both made compromises. South Korea did not get an apology, they got a statement of regret about the injury, which they can spin as an apology,” Yonsei University’s John Delury told Reuters.

“The more important point is maintaining this channel and re-opening the relationship. This is hardly going to be easy to implement, but it’s a landmark agreement which lays out a path.”

The agreement was welcomed by Washington and the United Nations.

“We welcome this agreement, and are hopeful it leads to decreasing tensions on the peninsula.

“It was a very tense several days.”