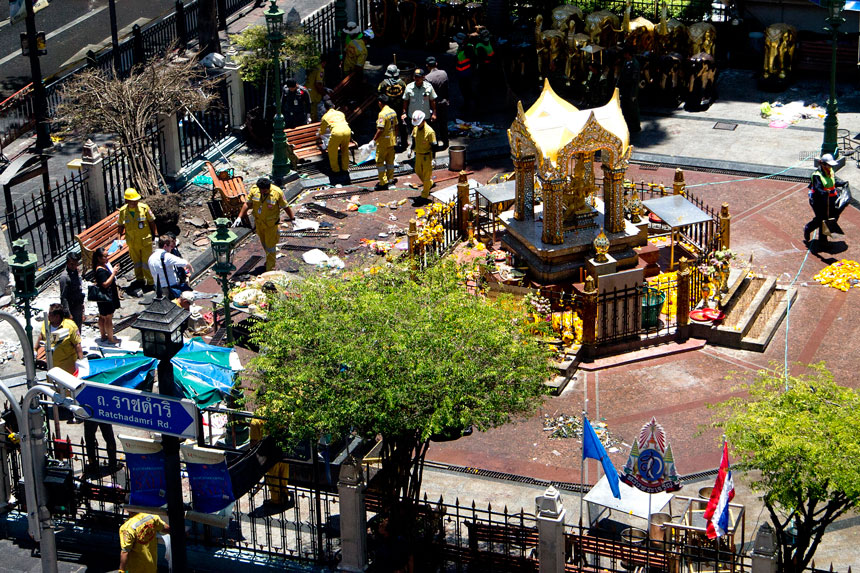 Authorities are urging patience in their hunt for the Bangkok shrine bomber, as the police chief admits Thailand lacks some of the “modern equipment” to find the prime suspect captured on security cameras.

Anxiety is mounting six days after the attack, which killed 20 people in the capital’s commercial heart, with the bomber still on the run.

The hunt has so far focused on a suspect in a yellow T-shirt seen on CCTV placing a rucksack under a bench at the Erawan shrine minutes before the blast.

A sketch of the man has been widely circulated. He is described on his arrest warrant as “foreign” but police have since said he could in fact be Thai or of mixed race.

Unverified footage, time-stamped just a few minutes after Monday’s blast, shows a second man in a blue T-shirt kicking a package into water near a bridge in the same spot where a device exploded on Tuesday without injuries.

But police have not publicly linked the two blasts despite pressure to reveal more.

“The slowness of the investigation is not because the police lack capacity,” national police chief Somyot Poompanmoungyot told reporters.

“But it’s because we don’t have the modern equipment that supports the work.”

He did not reveal the equipment the police need but it is likely to be facial recognition technology or programs to enhance security camera footage.

Earlier in the week junta chief Prayut Chan-O-Cha bristled at suggestions his government should seek overseas help in a complicated inquiry, with both the United Kingdom and Australia offering their expertise.

Despite their technological limitations, Thai police say the investigation is progressing.

“We cannot give details of that progress … let the police work,” police spokesman Prawut Thavornsiri said.

“We are working around the clock … but this kind of a case is not easy.”

More than 50 people remain in hospital.

With no one claiming responsibility, rumours and speculation have swirled in Thailand over the country’s worst single mass-casualty attack in living memory.

The potential perpetrators named by police and experts alike include international jihadists, members of Thailand’s southern Malay-Muslim insurgency, militants on both sides of Thailand’s festering political divide or even someone with a personal grudge.