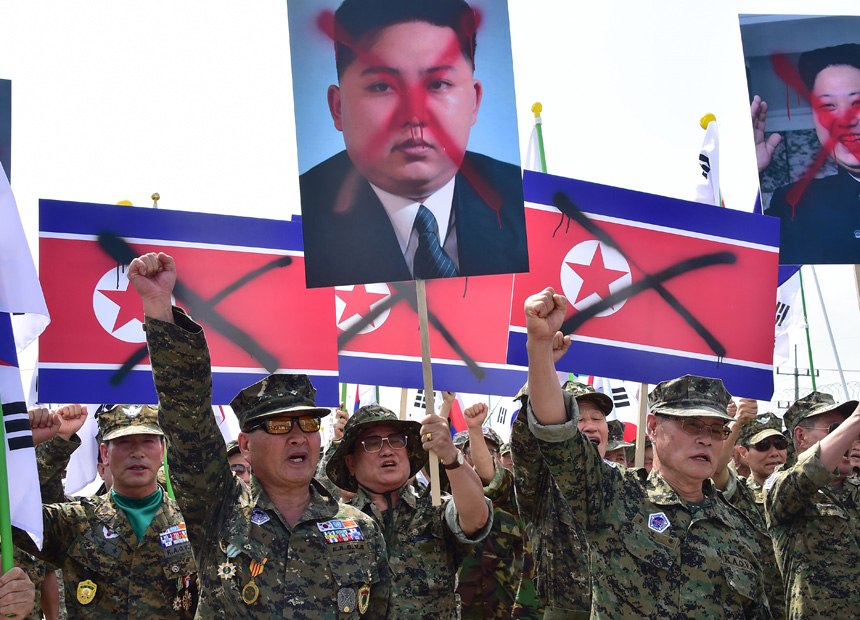 Mr Trump has lashed out at his North Korean counterpart. Photo: AAP

Top aides to the leaders of North and South Korea have resumed crisis talks on avoiding a threatened military clash, even as Seoul accused Pyongyang of undermining the process with renewed naval and land deployments.

“The North is adopting a two-faced stance with the talks going on,” a ministry official said.

The discussions at the border truce village of Panmunjom resumed in the afternoon after a marathon negotiating session the night before ended in the early hours without final agreement.

Analysts saw the decision to keep talking as a positive sign, with the presidential Blue House in Seoul saying the two sides would “continue to narrow down differences”.

But the gaps to be bridged are daunting, with both militaries on maximum alert and flexing their weaponry across a border that has already seen one exchange of artillery fire.

North Korea declared a “quasi-state of war” in frontline areas and made an ultimatum for Seoul switch off banks of loudspeakers that have been blasting high-decibel propaganda messages across the border for the past week.

Seoul said Pyongyang must first apologise for landmine explosions that maimed two members of a border patrol earlier this month.

The North has denied any role in those blasts and is extremely unlikely to apologise, while the South will not accept a compromise that might be seen to reward Pyongyang’s belligerence.

“The two sides may be able to come up with a statement in which some sort of ‘regret’ is expressed without explicitly naming the North as a responsible party,” Jeung Young-tae, an analyst at the Korea Institute for National Unification in Seoul, said.

“But I don’t think such a vague statement will work this time,” Mr Jeung said, stressing that the case of the maimed soldiers – both of whom lost legs – had become an emotional issue in the South.

“So I think the best outcome of this meeting will be an agreement for another high-level meeting in the future, such as defence ministerial talks,” he added.

That would leave open the issue of the propaganda broadcasts, which Seoul had vowed to continue in the face of an ultimatum from Pyongyang to desist or face military action.

“The two sides had wide discussions on ways to settle the recently-developed situation and to improve inter-Korean relations down the road,” South Korean presidential spokesman Min Kyung-wook said after the night-long first session.

With North Korea declaring it is in a “wartime state”, Professor Andrei Lankov explains what it is really like inside the rogue kingdom.
UN secretary-general Ban Ki-moon, a former South Korean foreign minister, welcomed the decision to stay at the negotiating table, urging both Koreas to “redouble” their efforts.

“He encourages both sides to use the resumed discussions to pave the way for de-escalating the situation … on the Korean peninsula,” Mr Ban’s office said in a statement.

South Korea said the initial request for talks had come from the North, despite its aggressive rhetoric and military posturing of recent days.

On the orders of Kim Jong-un, the North Korean People’s Army has been in a “fully armed, wartime state” since Friday, while the foreign ministry in Pyongyang warned Saturday that the situation had “reached the brink of war” and was “hardly controllable”.