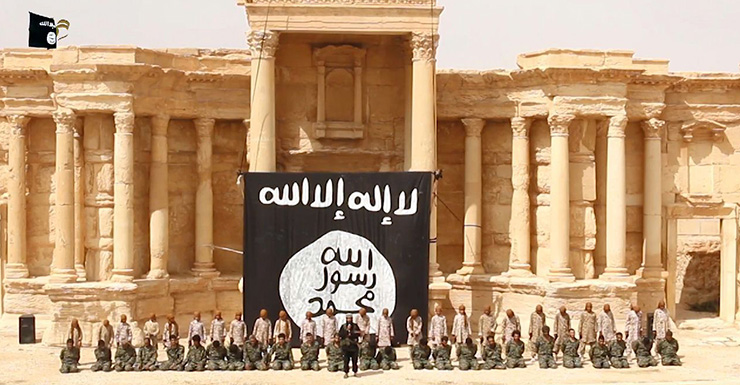 Khaled al-Asaad would not divulge to Islamic State militants where the antique treasures of his beloved Palmyra were carted off to and hidden before the Islamist extremists took control of the ancient Roman city in Syria earlier this year.

For that, the renowned Syrian scholar of Palmyra’s antiquities was beheaded publicly on Tuesday, his body hoisted to hang from one of the Roman pillars he had laboured to preserve.

That Mr al-Asaad dared defy the authorities of the self-described Islamic State (IS) was probably enough to bring its wrath on him.

But the courageous scholar’s execution over his protection of valuable antiquities may also say something about the terrorist organisation’s evolving sources of funding, some experts in terrorist financing say.

“None of this is a science, but it’s fair to say that IS is turning more to the smuggling and trafficking of antiquities as other revenue sources become more problematic or dry up,” says Colin Clarke, an expert in terrorist and insurgent financing at the RAND Corp in Pittsburgh.

“We can imagine IS detaining Mr Asaad and saying, ‘We need those antiquities, we will find them, and if you try to hinder us you will pay the price’,” Dr Clarke says.

The Islamic State, which controls more than one-third of both Syria and Iraq, is better known for blowing up ancient sites and sledge-hammering treasured artefacts as part of its zeal to rid the territories it has seized of the vestiges of what it considers to be pagan or infidel civilisations.

Antiquities scholars have worried for months that Islamic State militants would carry out the wholesale destruction of Palmyra as part of its purification campaign.

But Palmyra has largely been spared, at least so far, suggesting to Islamic State analysts that the group is intent on trafficking whatever antiquities it can.

“IS has been planning strategically how to use Palmyra since they took control of the site, and I’d imagine they’re sorting through whatever they’ve got their hands on and are looking for more,” the Washington Institute for Near East Policy’s Syria expert Andrew Tabler says.

“It just goes to show that antiquities is not just a cultural matter, it’s a business matter.”

Experts estimate that the Islamic State continues to bring in more than $1 million a day in revenues, primarily from illicit oil sales, taxation and extortion in the lands it controls, and ransom from kidnappings.

But as those major income sources have been hit – for example, as oil smuggling has become more difficult with stepped up airstrikes by the US and the anti-Islamic State coalition it leads – the terrorist group has shifted to fill the gap with other revenue-producing activities.

“IS started out from day one with reliance on mafia-style activities to finance itself, and it’s been fairly adept at making up for falling revenues from one activity by shifting to another,” Dr Clarke, who recently penned a book called Terrorism Inc, says.

“It makes sense that, if the oil lifeline is coming under pressure, it would look at its portfolio and see where it could shift, and that would include antiquities.”

Islamic State militants did recently destroy a large antique lion sculpture that long stood guard outside the Palmyra museum where al-Asaad worked for five decades. But thousands of pieces from the museum and elsewhere in Palmyra’s archaeological sites were removed and hidden just before the Islamic State’s capture of the city in May.

The antiquities’ whereabouts is the information that the Islamic State militants wanted – and that al-Asaad was apparently unwilling to give up.

But with or without the museum’s pieces, Palmyra is a trove of antiquities, Mr Tabler of the Washington Institute says, and he expects more of its treasures to reach the black market in antiquities.

“IS is going to be in control of Palmyra for quite some time still, if not for the foreseeable future,” he says, “so we’re probably only seeing the beginning of them playing the antiquities card.”

RAND’s Clarke says there is very likely another explanation for al-Asaad’s public execution, and that is the Islamic State’s need to nip in the bud any defiance of its authority and control.

“This is symbolic,” he says. “It sends a clear message to anyone who would defy IS: ‘We’re not messing around’.”

Islamic State, he adds, is seeking to establish a state-like entity with laws and clear rules that, while harsh, nevertheless give the inhabitants of its lands a “predictable” path for pursuing their lives.

“It’s doing it with particularly brutal methods,” Clarke says, “but what IS is saying is that ‘As long as you do the things we’ve clearly laid out and you aren’t foolish enough to rebel against us, you can survive under our rule’. ”

The scholar who defied Islamic State – and died for it