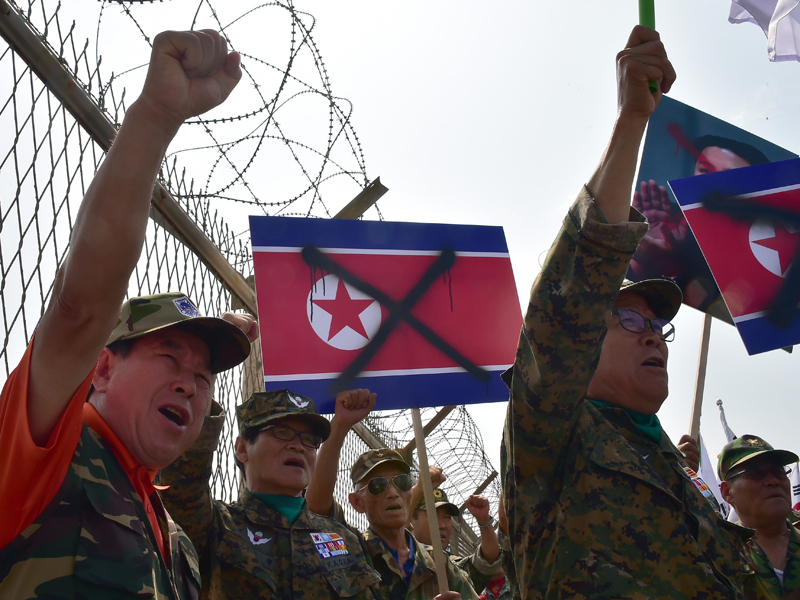 North Korea’s military is warning of imminent strikes on South Korean border units and issued fresh nuclear weapons threats against the US in response to what it called “grave” provocations.

The warnings came amid escalating military tensions on the Korean peninsula following a landmine attack South Korea blamed on the North and ahead of a major South Korea-US joint military exercise condemned by Pyongyang.

After the mine blasts which maimed two South Korean soldiers on border patrol, Seoul recently resumed high-decibel propaganda broadcasts across the heavily-militarised frontier, using loudspeakers that had lain silent for more than a decade.

Pyongyang rejected accusations that it was behind the mine incident as “absurd”, and its frontline army border command on Saturday said the broadcasts were a “grave military provocation” and demanded they be halted immediately.

Failure to do so would trigger “an all-out military action of justice to blow up all means for ‘anti-north psychological warfare’ in all areas along the front,” the command said in a statement carried by the North’s official KCNA news agency.

All South Korean units involved in the broadcasts “whether they are fixed or mobile, will never escape the strikes”, it added.

The threat came a day after North Korea said it would turn Seoul into a “sea of fire” if South Korean activists continue the practice of launching propaganda leaflets across the border by helium balloon.

The nuclear-armed North regularly ups its bellicose rhetoric before and during the series of joint military exercises South Korea holds with its US ally every year.

Monday sees the start of the two week-long “Ulchi Freedom” drill which involves tens of thousands of South Korean and US troops in a wargame that simulates an invasion by North Korea.

On Saturday, the North’s powerful National Defence Commission threatened the US with the “strongest military counter-action” should the joint exercise go ahead.

The North Korean army and people “are no longer what they used to be in the past when they had to counter the US nukes with rifles,” the commission said in a statement.

The fresh warnings came as both Koreas on Saturday celebrated the 70th anniversary of the liberation of the Korean peninsula from Japanese colonial rule.

There had been hopes that the anniversary might be an opportunity for some sort of inter-Korean rapprochement, but instead inter-Korean ties have been on a downward trajectory for months.

Disease concern for survivors of Afghanistan earthquake
Steve Smith confirmed as starter for first Test against Sri Lanka
Deadly Norway shooting treated as Islamist terrorism: Police
Matildas will be keen to forget 7-0 drubbing by Spain
Upcoming stats will reveal where and how hard rates are hitting economy
Victorian MPs pocket a tidy 2.75 per cent pay raise
Debris not from MH370
Today's Stories