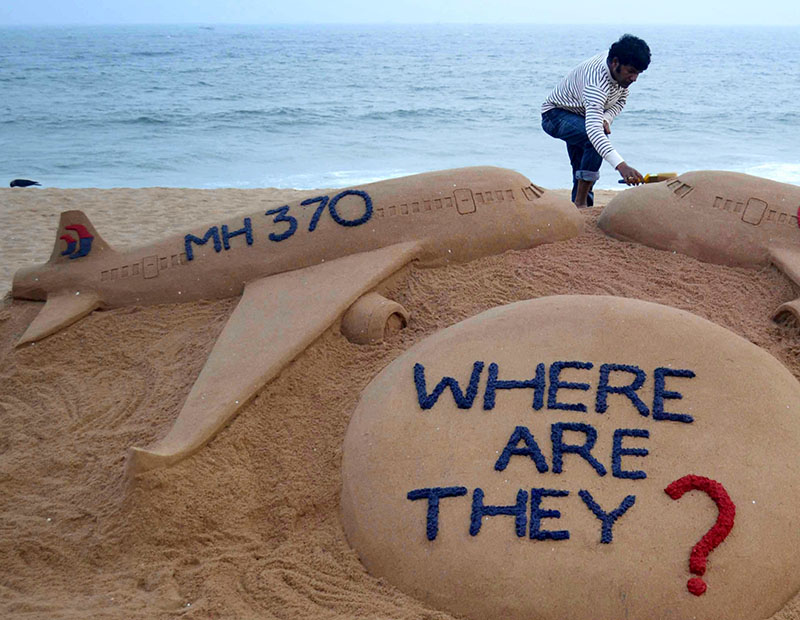 French officials will examine a piece of plane debris that washed up on an island in the Indian Ocean to determine if it is from a missing Malaysia Airlines flight, as more possible debris is found.

The wing debris has been flown to France after Malaysian prime minister Najib Razak said it was ‘very likely’ it belonged to a Boeing 777, the same type of passenger jet as MH370.

Another possible remnant of MH370 — a dilapidated suitcase — washed up on the same beach hours later.

• Investigators scramble to solve Boeing 777 debris mystery
• Debris ‘almost certain’ from Boeing 777
• Where in the world is MH370?

Deputy Prime Minister Warren Truss said the suitcase was handed to police on Reunion Island and investigators made arrangements to retrieve it.

However he played down the possibility of the suitcase being linked to MH370 when speaking with Sky News.

He pointed out the suitcase could be rubbish as the lack of marine life attached to it suggested it had not been in the sea for a long time.

“I think it is less likely that the suitcase is related to the MH370 incident than the aircraft part that has been identified,” he said.

Mr Razak said the location the debris had been found was consistent with where parts of MH370 could have drifted.

The two-metre piece of wing wreckage, believed to be a plane’s “flaperon”, will be transported to France “at the end of the week for analysis”, a source told ABC.

Earlier, Mr Truss said the wing discovery was a “very significant development” in the search for MH370.

“It’s the first real evidence that there’s a possibility that part of the aircraft may’ve been found,” he told reporters.

“It’s too early to make that judgement, but clearly we’re treating this as a major lead.

“This wreckage has been in the water, if it is MH370, for well over a year, so it could have moved so far that it’s not going to be that helpful in pinpointing precisely where the aircraft is.

“It certainly would suggest the search area is roughly in the right place.”

“It is almost certain that the flaperon is from a Boeing 777 aircraft. Our chief investigator here told me this,” Abdul Aziz Kaprawi said.

“As soon as we have more information or any verification we will make it public,” Mr Najib.

“We have had many false alarms before, but for the sake of the families who have lost loved ones, and suffered such heartbreaking uncertainty, I pray that we will find out the truth so that they may have closure and peace.”