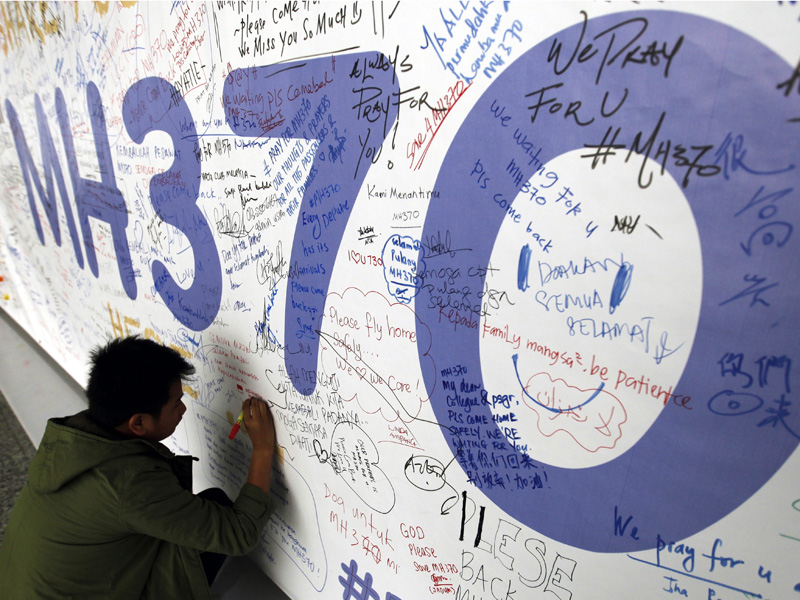 French and Malaysian aviation experts continue to examine a piece of debris for any clues that it might be part of missing Malaysia Airlines flight MH370.

Aviation experts said a two-metre piece of debris washed up on the Indian Ocean island of Réunion was very likely a flap from the trailing edge of the wing of a Boeing 777 airliner – the same type of plane as MH370.

The debris has been sent to France so authorities can examine the piece of the wing.

The discovery has raised hopes that aviation’s greatest modern mystery could be solved. The MH370 flight from Kuala Lumpur to Beijing vanished from radar screens on March 8, 2014, without a trace, with six Australians on board.

Only hours later a dilapidated suitcase turned up on the same beach, which Australian deputy prime minister Warren Truss said would be examined.

On Thursday night (AEST), Malaysia’s Prime Minister Najib Razak confirmed that the debris found on Réunion was “very likely” to be from a Boeing 777 aircraft.

He also promised relatives of passengers that Malaysia would not give up searching for the plane.

“To find out as fast as possible, the debris will be shipped by French authorities to Toulouse, site of the nearest office of the BEA, the French authority responsible for civil aviation accident investigations,” Mr Razak said.

Officials involved in the investigation have been cautious, though, warning that even if the piece was from MH370, the task of finding the missing plane remained enormous.

To add to the speculation, police on the ground confirmed reports that remnants of a badly damaged suitcase was found at Saint-André, close to where the plane debris was recovered.

The aviation website AirLive.net also tweeted that one of the codes reportedly stamped on the debris, matched a Boeing 777 flaperon.

Australian Deputy Prime Minister Warren Truss said at a press conference on Thursday, although it was too early to make assessments whether the item was part of lost aircraft MH370, it was the first glimpse of hope since the plane went down.

“Clearly we are treating this as a major lead,” Mr Truss said.

“The photos are not inconsistent with a Boeing 777, but there are other possibilities.

“More investigation will be needed to verify that it is from a 777 and if so, which one.”

Mr Truss said a number was identified on the aircraft part which was not a serial number but could be a maintenance number, which might assist to determine whether it is from the missing plane.

“It is a realistic possibility that debris from where MH370 is thought to have crashed could have drifted as far as Réunion,” Mr Truss said.

He said if the wreckage was identified as being from MH370 it would be consistent with other analysis and modelling that the plane is in the southern Indian Ocean.

“We’ve refined the boundaries of (our) search on several occasions in the past,” Mr Truss said.

“We still believe that the search area is the right one.”

Mr Truss said the government had contacted all Australian families who had loved ones on the flight, and would keep them updated throughout the fresh investigation.

Irene Burrows – whose son, Rodney, was onboard MH370 with his wife, Mary – said the discovery of debris had brought back a lot of memories.

“We hope to find out soon one way or another, and end all the uncertainty,” she told the ABC.

“I hope the search continues until they find all the pieces. I feel it will, because it’s not just us who want to know – it’s all the airlines and all the families.”

Malaysian Airlines responded to the wreckage reports, saying at this stage it was too early to ascertain its origin.

“Malaysia Airlines is working with the relevant authorities to confirm the matter. At the moment, it would be too premature for the airline to speculate the origin of the flaperon,” said the company in a statement.

No trace of MH370 or its 239 passengers and crew had been found to date. Barnacles could be the key

Aviation experts said they had “a high degree of confidence” that the piece of aeroplane debris was part of a broken Boeing 777 wing.

Multiple experts, including a Boeing air safety investigator, agreed the two-metre long, barnacle-encrusted wreckage was probably a ‘flaperon’ from the trailing edge of a wing.

Australian authorities have begun examining the photos of the wreckage.

Mr Truss said because the debris was not in Australia’s search and rescue area, investigations would be led by French and Malaysian officials.

He said barnacles on the debris could help to identify the wreckage’s origins, giving an indication of how long it had been in the ocean.

The Journal de L’île de la Réunion said expert analysis of photos of the debris had identified the type of crustaceans on it.

The paper said the species was Lepas anatifera (also known as goose barnacle), which lived ‘in temperate or warm waters’ and grew by 1cm to 2cm each year.

Marine biologist Joseph Pouplin from the French naval academy in Brest told the newspaper that these crustaceans could have attached themselves to the debris for several months or a year.

An Air Transport Safety Bureau (ATB) spokesman said that the distance of Réunion from the search site meant the debris would likely not assist in locating MH370.

“It probably won’t help us narrow the search at all,” ATSB spokesman Joe Hattley said.

Australia is leading a search of 120,000sq/km of sea floor in the southern Indian Ocean.

Meanwhile, British Prime Minister David Cameron was on his way to Malaysia on Thursday as part of a tour of south-east Asia.

Earlier this week, it looked as if his visit would be dominated by corruption allegations levelled at Malaysian PM Najib Razak, The Guardian reported.

But now it seemed attention would be on whether the missing Malaysian Airlines plane had finally yielded its first tangible clue.