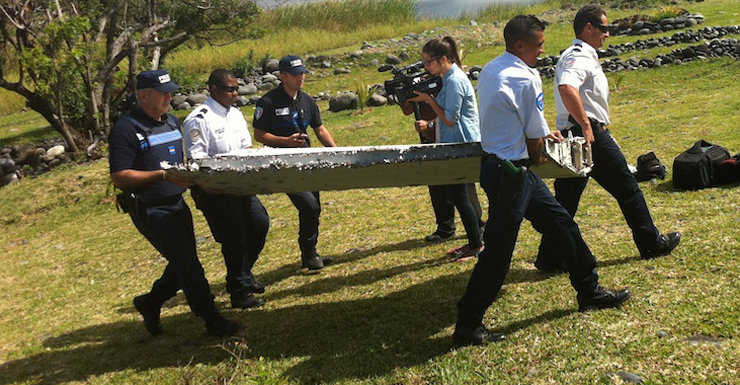 Malaysia’s Deputy Transport Minister says it is “almost certain” that debris washed up on the French Indian Ocean island of La Reunion is part of a Boeing 777 aircraft.

The only Boeing 777 currently missing in the Indian Ocean is MH370, making it possible the passenger jet that disappeared in March last year with six Australians on board has finally been found.

“It is almost certain that the flaperon is from a Boeing 777 aircraft. Our chief investigator here told me this,” Deputy Transport Minister Abdul Aziz Kaprawi said on Thursday.

• Where in the world is MH370?
• MH370 crash blamed on batteries
• Julie Bishop condemns Russian veto of MH17 tribunal

Australian Deputy Prime Minister Warren Truss said at a press conference on Thursday it was too early to make assessments whether the item was part of lost aircraft MH370, but it was the first glimpse of hope since the plane went down 16 months ago.

“Clearly we are treating this as a major lead,” Mr Truss said.

“The photos are not inconsistent with a Boeing 777, but there are other possibilities.

“More investigation will be needed to verify that it is from a 777 and if so, which one.”

Mr Truss said a number was identified on the aircraft part – BB670 – which was not a serial number but could be a maintenance number, which might assist to determine whether it is from the missing plane.

“It is a realistic possibility that debris from where MH370 is thought to have crashed could have drifted as far as Réunion,” Mr Truss said.

He said if the wreckage was identified as being from MH370 it would be consistent with other analysis and modelling that the plane is in the southern Indian Ocean.

“We’ve refined the boundaries of (our) search on several occasions in the past,” Mr Truss said.

“We still believe that the search area is the right one.”

Mr Truss said the government had contacted all Australian families who had loved ones on the flight, and would keep them updated throughout the fresh investigation.

He said the debris was not in Australia’s search and rescue area so investigations would be led by French and Malaysian officials.

Experts weigh in on missing part

Aviation experts also had “a high degree of confidence” that the piece of aeroplane debris is part of a broken Boeing 777 wing.

Multiple experts, including a Boeing air safety investigator, agreed the two-metre long, barnacle-encrusted wreckage was probably a ‘flaperon’ from the trailing edge of a wing, a US official told Associated Press.

A Malaysian team will inspect the fragment, which might have been used to change the plane’s direction and speed.

“I have sent a team to verify the wreckage,” Malaysian Transport Minister Liow Tiong Lai told reporters in New York.

“Whatever wreckage found needs to be further verified before we can further confirm whether it belongs to MH370.” Aviation expert and former military pilot Xavier Tyletman, one of the first to publish images of the debris, said the component was “incredibly similar” to a Boeing 777 wing.

“I’ve been studying hundreds of photos and speaking to colleagues, and we all think it is likely that the wing is that of a Boeing 777, the same plane as MH370.”

The wreckage, seemingly part of a wing, was found by people cleaning up a beach on La Reunion island, near Madagascar.

“We’ve received some pictures of the item and we are having them assessed by the manufacturers as to what they may be,” Australian Transport Safety Bureau spokesman Joe Hattley said.

“The French authorities have it secured,” he said. “We’ll work with the French.”

The first step will be to determine if the wreckage is indeed part of a Boeing 777 and then if it belonged to MH370, Mr Hattley said.

Wreckage found in the right place

CSIRO oceanographer Dr David Griffin, who estimated the possible direction of floating wreckage for the official search, told The New Daily the location matched his calculations.

“This is entirely consistent with what we were expecting,” Dr Griffin said.

“We did all the calculations about a year ago and that anytime from last Christmas things could be washing up in the Madagascar region and that whole island group.

“When I heard it I thought it was a vindication.”

Australian aviation expert Neil Handsford told The New Daily the wing part would be easily identified by its serial number, if the number is still visible.

He confirmed that a Boeing 777’s flaperon is a likely piece of the aircraft to be found.

“It is a composite material, it’s carbon fibre, its not aluminium so it’s got more chance of floating because it’s light weight.

“There would’ve been an air void in it which is probably why its one of the few components that floated and in an impact with the water it is the sort of thing that would have been torn off.”

Malaysian Airlines has responded to the wreckage reports, saying it is “too premature” to ascertain its origin.

“Malaysia Airlines is working with the relevant authorities to confirm the matter. At the moment, it would be too premature for the airline to speculate the origin of the flaperon,” said the company in a statement.

A local French official official warned that “people are getting ahead of themselves” by making a link to MH370.

“It is more than likely plane debris, [but] we don’t know what exact part it may be,” French Air Force officer Eric Chesneau said.

Even if verified, the wreckage still might not help authorities find the final resting place of MH370.

“We cannot use that to refine a search area of the sea floor. It’s way too far away. Finding it there is consistent with too many possible source locations,” oceanographer Dr Giffin said.

“It rules out some of the crazy theories that it’s on some military base but it doesn’t really do much more than that.”

Search efforts led by Australia have focused on a broad expanse of the southern Indian Ocean. This debris was found in the western portion.

No trace of MH370 or its 239 passengers and crew has been found to date.