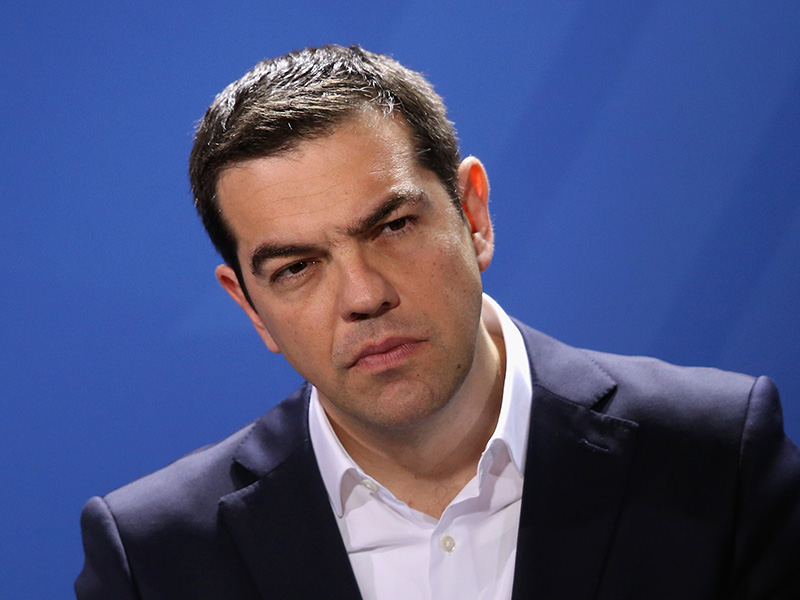 Greek Prime Minister Alexis Tsipras has come under severe pressure from hostile members of his Syriza government to resign after signing €86 billion bailout package with European creditors on Monday.

Mr Tsipras on Tuesday morning was trying to stave off a revolt within his left-wing government after one of his junior ministers quit the parliament.

Opposition to the onerous terms of the bailout deal is coming from the hardline left wing of Syriza known as the “Left Platform”, which is led by the energy minister, Panagiotis Lafazanis.

According to the online edition of To Bima newspaper Mr Lafazanis told the prime minister on Tuesday to immediately withdraw the agreement made in Brussels.

“The agreement signed with the institutions is unacceptable and a radical party, such as SYRIZA, does not deserve to be responsible for bringing such an agreement, after fighting to abolish the bailout programs and austerity measures,” Mr Lafazanis said in a statement.

“Our so-called partners led by the German establishment, behaved towards our country as being their colony and they are nothing more than brutal blackmailers and financial assassins.”

The looming split within Syriza has the potential to create a political vacuum in Greece after the second largest party in the national parliament, the conservative New Democracy Party, downplayed the prospect of forming a government of national unity under Tsipras.

There is also a deep disconnect between the Greek electorate’s opposition to austerity measures and the coarse terms of the bailout deal.

If the rifts within Syriza result in a fracturing of support for Mr Tsipras in the parliament he may have no option but to call an election, which would disrupt the reform timetable agreed under the bailout deal.

Syriza controls 149 seats in the 300-member parliament and governs with the support of its coalition partner, the Independent Greeks.

Panos Kammenos, the party’s leader has signalled he would not support the conditions of the bailout package but would continue to back Mr Tsipras as prime minister.

He described the deal struck with European creditors as “extortionate”.

Mr Kammenos also ruled out participating in a national unity government to help steer Greece through the current political crisis.

The reluctance of minority parties to join a unity government under Mr Tsipras has stoked concerns that his administration might eventually be rendered dysfunctional.

Mr Kammenos said last night that support among the 13 MPs from the Independent Greeks was “unanimous” for Mr Tsipras.

At present Tsipras’ grip on power is holding, but this might change as the effects of the economic recession and the new austerity measures are absorbed by Greek voters.

The first raft of measures that must be implemented under the Brussels’ agreement were introduced to the Greek Parliament yesterday.

They include a widening of indirect taxes and cuts to pensions.

European leaders were carefully monitoring the parliamentary proceedings last night to gauge how many Syriza members would defy Mr Tsipras’ call for them to support enactment of the new measures.

They are expected to pass the parliament with support from centrist parties.

Public service unions have called a national strike against proposals to privatise state assets, and a street protest against Mr Tsipras’ austerity measures will also take place on Wednesday evening in Athens.

Greece’s summer tourism season will be a disaster for the hospitality industry after European officials said the first injection of cash from the new deal would not be made for another four weeks.

This means that Greek banks are likely to remain closed for at least another month, effectively stymieing economic activity across the country.

Eurozone president Jeroen Dijsselbloem said Euro members were trying to establish a special facility to help Greece pay a €4.2 billion debt to the European Central Bank next week, but that bailout money would not begin flowing to the Greek Government until the middle of August.

Several European Union members, including the United Kingdom, said they were not willing to commit emergency funds to Greece before the first bailout payment.

Greece’s leading financial newspaper, I Kathemerini, described the bailout deal as a “fragile” plan to rescue Greece and questioned whether the breakdown in trust between Tsipras and his European counterparts would eventually make it impossible to implement.

The conservative newspaper suggested that Tsipras could extend his prime ministership by entering an alliance with centrist parties if his support base collapses within Syriza.

Most European stockmarkets, including London and Frankfurt, were down in early trading on Tuesday.