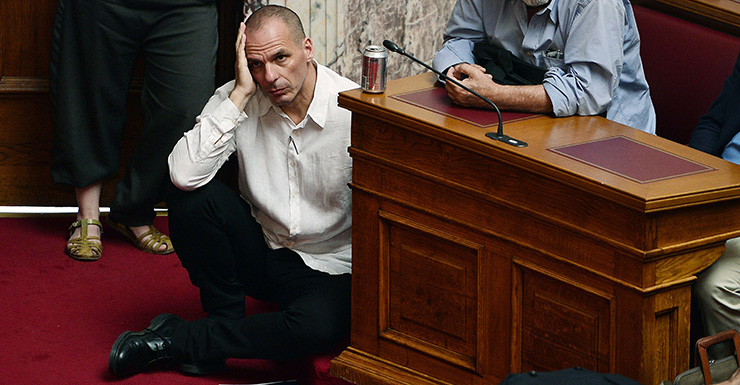 Yanis Varoufakis has stepped down, after the Greek referendum delivered the ‘no’ vote he campaigned for as the debt-ridden nation’s finance minister.

Mr Varoufakis’ blog has published a post showing he is stepping down because creditor nation representatives showed a preference he wasn’t involved.

“Soon after the announcement of the referendum results, I was made aware of a certain preference by some Eurogroup participants, and assorted ‘partners’, for my… ‘absence’ from its meetings; an idea that the Prime Minister judged to be potentially helpful to him in reaching an agreement,” he said.

“For this reason I am leaving the Ministry of Finance today.

“I consider it my duty to help [Prime Minister] Alexis Tsipras exploit, as he sees fit, the capital that the Greek people granted us through yesterday’s referendum.

“And I shall wear the creditors’ loathing with pride.”

Mr Varoufakis enraged his debt negotiating opponents prior to the referendum when he said creditors were waging “terrorism” on Greeks in order to make them accept austerity.

“What they’re doing with Greece has a name: terrorism,” he said on Sunday.

“Why have they forced us to close the banks? To frighten people. And when it’s about spreading terror, that is known as terrorism.”

The referendum, held overnight on Sunday, delivered a landslide result to reject the austerity plan favoured by creditors and campaign to make a new plan.

Greeks voted 61.3 per cent against the current austerity plan and 38.7 per cent for it with a turnout of 62.5 per cent.

Greece owes the International Monetary Fund and other European nations about 240 billion euros and is facing a catastrophic default that some suggest could end in another global recession.

The jubilation at the ‘no’ result on Athens streets was a happy side to a sad situation, as ATMs in the country run out of money and banks consider rationing cash withdrawals at about 20 euros a day.

Greek Prime Minister Alexis Tsipras said the no vote would force creditors to negotiate more favourably towards a restructure of the debt.

The euro rose after Mr Varoufakis’s announcement, which was expected to renew hopes that the creditors – the European Central Bank, the European Commission and the International Monetary Fund (IMF) – could be persuaded back to the negotiating table despite the country’s decisive rejection of the reforms they were demanding in return for the release of a final tranche of bailout funds.

German chancellor Angela Merkel was to meet with French leader Francois Hollande in Paris amid a flurry of other meetings to size up the implications of the vote.

With the ramifications still unclear and some analysts putting the chances of a Greek exit from the eurozone at “very high”, European Commission head Jean-Claude Juncker is set to hold a teleconference with ECB chief Mario Draghi, Mr Tusk and Eurogroup head Jeroen Dijsselbloem.

German and French finance ministers are set for talks beginning in Warsaw at 7pm (AEST), while the Euro Working Group of top treasury officials will meet in Brussels.