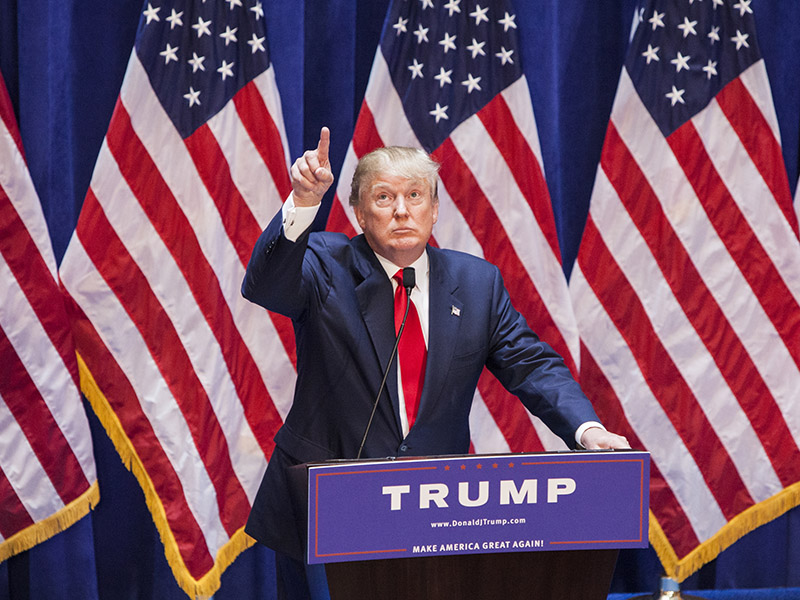 Donald Trump has parlayed his father's money and connections into a global brand. Photo: Getty

Property tycoon Donald Trump, one of America’s most flamboyant and outspoken billionaires, has thrown his hat into the race for the White House, promising to make America great again.

The 69-year-old long-shot candidate ridiculed the country’s current crop of politicians and vowed to take on the growing might of China in a speech launching his run for the presidency in 2016.

“I am officially running for president of the United States and we are going to make our country great again,” he said from a podium bedecked in US flags at Trump Tower on New York’s Fifth Avenue.

• Call me Jeb! Another Bush to run for president
• The man who wants to take on Hillary Clinton

The tycoon strode onto the stage after sailing down an escalator to the strains of Rockin’ In The Free World by Canadian singer Neil Young after being introduced by daughter Ivanka.

His announcement follows years of speculation that the man known to millions as the bouffant-haired host of American reality TV game show The Apprentice would one day enter politics.

Mr Trump identifies himself as a Republican, and has supported Republican candidates in the past.

But in his announcement speech he did not explicitly say if he was running for the party’s nomination or as an independent.

“But if I get elected president, I will bring it back bigger and better and stronger than ever before, and we will make America great again.”

Mr Trump denounced US foreign and economic policy, ridiculed his rival candidates and vowed to reverse what he called US decline.

He promised to build up the military, stand up to the Islamic State extremist group in Iraq and Syria, terminate president Barack Obama’s order shielding many undocumented foreigners from deportation and support gun ownership.

The Democratic National Committee reacted with sarcasm before Mr Trump even finished his 45-minute speech.

“He adds some much-needed seriousness that has previously been lacking from the GOP field, and we look forward to hearing more about his ideas for the nation,” spokeswoman Holly Shulman said.

Mr Trump announced that he had a total net worth of more than $US8 billion — double Forbes’ estimate of $US4.1 billion — and said the 2016 election would be decided on competency.

‘Our country is in serious trouble’

“I’m not doing that to brag,” he said, waving a piece of paper with details of his fortune.

“I’m doing that to say that’s the kind of thinking our country needs.

“Our country is in serious trouble. We don’t have victories anymore,” he said.

Mr Trump said unemployment had risen sky high in the United States, even past 20 per cent, challenging government figures that put it at under 6 per cent.

“Don’t believe the 5.6 per cent. Don’t believe it,” Mr Trump said, adding that China and Mexico had stolen American jobs.

“When was the last time anyone saw us beating, let’s say, China in a trade deal. They kill us. I beat China all the time.

“When did we beat Japan at anything? They send their cars over by the millions and what do we do?” he said as his family looked on and some in the crowd broke into chants of “we want Trump”.

“Even our nuclear arsenal doesn’t work.”

Donald Trump wants to be president and ‘beat’ China