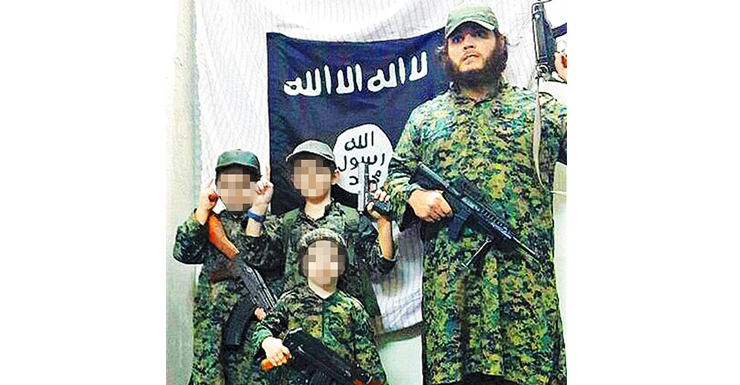 Khaled Sharrouf and three of his children.

The family of Islamic State (ISIL) jihadist Khaled Sharrouf, including the son who was famously photographed holding a severed head, are reportedly trying to return of Australia from war-torn Syria.

Sharrouf, who last year posted a photo on the internet of his seven-year-old son holding up a severed head, was on a terrorist watchlist and used his brother’s passport to leave Australia.

The family of his wife, Tara Nettleton, are trying to arrange repatriation for her and the couple’s five children, including the boy seen in the notorious photo, Fairfax reported.

Intelligence suggested the reason behind the family’s desire to return to Sydney was because of poor living conditions in Syria, a police source told Fairfax.

While there was no evidence that Sharrouf himself is looking to return – a move which would see him face certain prosecution and a lengthy jail sentence – the predicament of his children raises sensitive issues due to their young age.

The photo posted on Facebook in 2014 of Sharrouf’s seven-year-old boy holding a decapitated head in Syria sent shockwaves around the world.

Speaking in Canberra on Wednesday, Prime Minister Tony Abbott said Ms Nettleton could expect to face the full force of the law if she returned to Australia.

She is suspected of helping to spirit her children to Syria via Malaysia to join her husband.

“That’s what the Australian public expect. Crime will be punished,” he said.

“Crime is crime is crime, and criminals will face the full severity of Australian law, whether they’re male or female,” Mr Abbott said.

“I’m afraid you don’t get off scot-free just because you say ‘I’ve seen the error of my ways’,” he said.

“If you commit serious crimes you should face serious punishment and as far as I’m concerned that will always be the case.”

Sharrouf, along with another ISIL fighter, Mohamed Elomar, were the first individuals added to the proscribed Australian terrorist list, and there are warrants out for their arrest if they try to return to the country.

Sharrouf was convicted and jailed for terrorism offences in Australia, as part of the Pendennis plot, but was released before joining ISIS.

In August, 2014, the maternal grandfather of the children pleaded with the government to bring them home.

The revelations about the possible return of Sharrouf’s children bring to the fore the debate about the citizenship rights of those who join ISIL.

On Tuesday, Prime Minster Tony Abbott confirmed the government would legislate to strip dual nationals of their Australian citizenship if they are involved in terrorism.

Speaking at a press conference, Mr Abbott also unveiled a new tranche of anti-terrorism laws and said the legislation would be introduced into Parliament within weeks.

He said the government was aware of about 100 Australians fighting with terror groups in the Middle East – with 40-50 per cent of them who “appear to be dual nationals”.

The move is part of the Federal Government’s billion dollar-plus fight against home-grown terror which will be bolstered by two separate counter-terrorism announcements made by the PM on Monday.