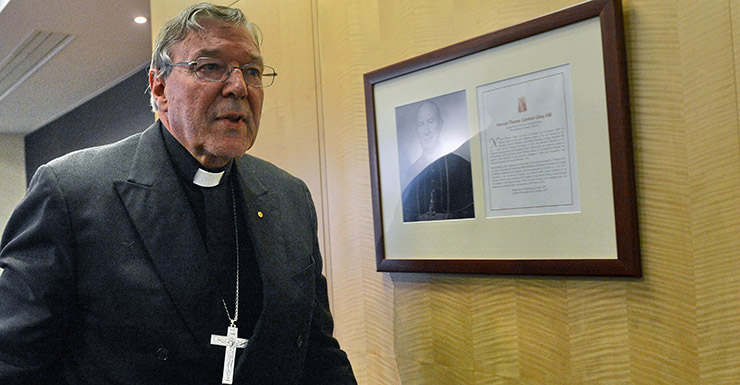 Cardinal George Pell has moved to “correct the record” after a string of accusations were made against him at the sex abuse royal commission.

One victim of notorious pedophile priest Gerald Ridsdale told the commission Pell asked him what it would take to “keep you quiet”.

The commission, sitting in Ballarat this week, also heard claims the cardinal had dismissed another abuse victim’s complaint as “ridiculous” and was complicit in moving Ridsdale to another parish.

The Vatican’s finance chief on Wednesday denied all the accusations.

The former Sydney archbishop has been mentioned at the commission by several witnesses who say he knew – or at the least suggest he might have known – about the widespread abuse in Ballarat while he was a senior priest there in the 1970s.

The cardinal will have to answer to the commission after David Ridsdale, the nephew of Australia’s worst pedophile priest, said he told Cardinal Pell in 1993 about the abuse at the hands of his uncle.

Mr Ridsdale told the commission Cardinal Pell, a family friend, asked him: “I want to know what it will take to keep you quiet.”

Mr Ridsdale said Cardinal Pell had started talking about his growing family and that he may soon have to buy a car or house.

“I have never stated that Pell offered me anything specific or tangible in our conversation, only that his attempts to direct the conversation down a particular path made me extremely suspicious of his motivations and what he was insinuating,” Mr Ridsdale said.

In a statement on Wednesday the cardinal said he had been “horrified” by survivors’ accounts to the commission of the abuse they suffered and the suicide of so many victims in Ballarat was “an enormous tragedy”.

“The crimes committed against them by priests and brothers are profoundly evil and completely repugnant to me.”

Cardinal Pell said he stood accused of bribery, being complicit in the moving of a known pedophile and of ignoring a victim’s complaint.

“It is important to correct the record, particularly given the false and misleading headlines.”

The cardinal said he never moved Ridsdale out of Mortlake Parish.

“I never moved him anywhere. I would never have condoned or participated in a decision to transfer Ridsdale in the knowledge that he had abused children, and I did not do so.”

Cardinal Pell said he continued to regret the misunderstanding between himself and David Ridsdale and he stood by his previous sworn denial of his allegations.

“At no time did I attempt to bribe David Ridsdale or his family or offer any financial inducements for him to be silent.”

Cardinal Pell also responded to allegations made by Timothy Green at the commission that when he was 12 or 13 he told then Father Pell in late 1974 that Brother Edward Vernon Dowlan was abusing boys at Ballarat’s St Patrick’s College.

“I said `Brother Dowlan is touching little boys’,” said Mr Green, himself a victim of Dowlan.

“Father Pell said ‘don’t be ridiculous’ and walked out.”

But Cardinal Pell said on Wednesday “to the best of my belief, this conversation did not happen”.

Commission chair Justice Peter McClellan says Cardinal Pell will be required to answer the allegations in a statement.