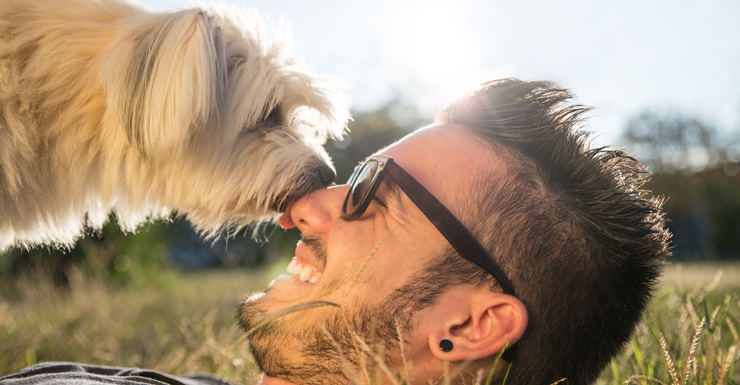 Pet pooches really have become part of the family.

Using thousands of years of co-evolution, dogs have tapped into the same brain pathway that bonds babies to their mums, a new study has suggested.

Unlike wolves, which avoid eye contact, the domesticated dog looks straight into its owner’s face and eyes, something researchers have known for more than a decade.

Now, experts believe this gaze releases the so-called ‘love hormone’ oxytocin, resulting in a similar connection to that of a mother and child, a team of Japanese scientists have reported.

“It can be said that dogs successfully cohabit with humans because they have been successful in adapting the bonding mechanism to relations with humans,” lead author Dr Miho Nagasawa, a veterinary medicine researcher at Azabu University, said in a statement.

“Dogs originally had this mechanism with the same species, but humans also went through some sort of evolution that allowed them to bond with other species, that is dogs,” Dr Nagasawa said.

This study, published in the prestigious Science journal, offers one explanation for how dogs and humans have become so intertwined.

In fact, not only do dogs ‘love’ us, but they also understand us.

Even as a puppy, man’s best friend can intuitively read some our gestures, such as pointing, whereas apes must be taught this skill, another study found.

A history of co-evolution

A video recently shared widely online purports to show wild wolves fearlessly approaching Canadian workers – perhaps a hint at how a courageous dog ancestor befriended us all those centuries ago.

For at least 10,000 years, our two species have lived, hunted, eaten, slept and even died side-by-side. For example, the 11,000-year-old remains of a puppy and an elderly person, with the human’s left hand resting on the dog’s flank, have been found buried together in Israel.

“Dogs definitely look at people’s faces and eyes, and they are really good at understanding and reading our cues and behaviours,” said Central Queensland University psychologist Dr Bradley Smith, who has studied canine behaviour and domestication.

“They use that to their advantage – they manipulate us and use us as problem-solving tools,” Dr Smith said.

“We’ve basically evolved together and we have very similar social structures and social behaviours.”

Humans have selectively bred some of these traits, while naturally intelligent dogs would also have thrived throughout history, Dr Smith said.

This close bond has been mutually beneficial, with dogs gaining food and shelter, and humans gaining a furry friend and worker.

“We may even have learned how to hunt from watching wolves,” Dr Smith said.

The Japanese study is not without its detractors.

The study’s authors deliberately selected dogs for their study who liked gazing at their owners, Dr Clive Wynne has claimed in Psychology Today.

Before the researchers did this, many of the dogs (much like wild wolves) were not that interested in loving looks.

So it may be that only some dogs take advantage of this brain hack.

If your pooch is one of the pets that likes to gaze into your eyes, you can feel very lucky indeed.

How man’s best friend hacked our brains for love