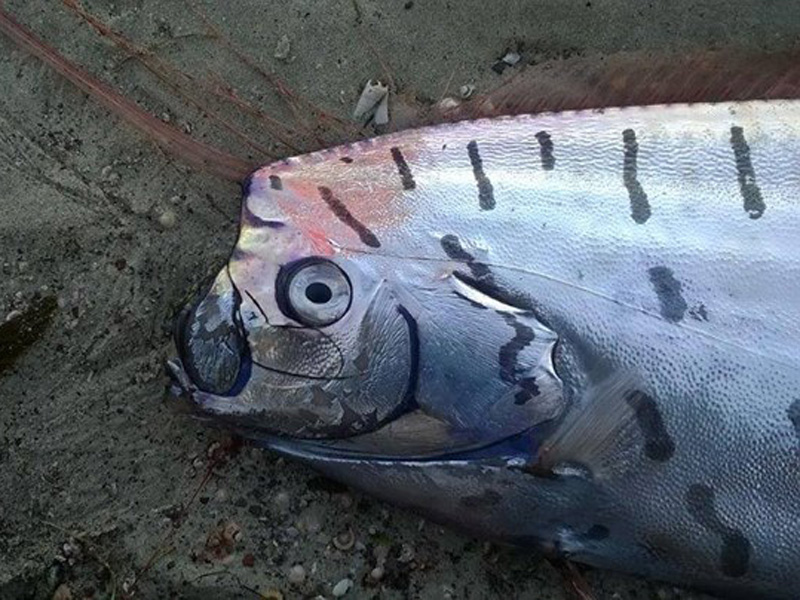 A deep sea creature that eats itself, and may have inspired some ‘sea monster’ myths, has washed ashore on New Zealand’s South Island, shocking a wildlife expert.

The three metre long oarfish, found on Thursday at Aramoana, was one of the most unusual creatures ever seen by the Department of Conversation’s David Agnew.

“It was really fresh, it had just washed up on the night tide and looking at it, it was a pretty weird looking creature,” said Mr Agnew, who had never seen such a fish in his 20 years living in the area.

“It didn’t have scales like other fish, it had smooth skin, like tinfoil, and if you rubbed it the silver would come off.”

The oarfish can reach lengths of up to eight metres, the NZ Marine Studies Centre and Aquarium posted on Facebook.

“Healthy oarfish are known to wash up on beaches and are sometimes found near the water surface – so may be the origin of some ‘sea monster’ myths,” the centre said.

“Specimens larger than 1.5 metres are known to shorten their length by biting off their tail.”

The fish may be preserved for scientific research.

There is an ancient Japanese myth that says a washed up oarfish is a sign of an impending earthquake.

This belief became further entrenched when 20 of them beached themselves before the nation’s disastrous 2011 earthquake and tsunami.

In the Asian nation, they are known as ryugu no tsukai, or “messenger from the sea god’s palace”.

It is believed to have ‘no direct predator’, which may add to the belief it’s some sort of mythical marine monster species.

Their reported lengths of up to 55-feet have also caused comparisons to beats while a marine biologist told the New York Times that they’re among the most ‘unpredictable’ animals known to man.

We know for sure that ‘sea monsters’ are out there, even though they were once thought to be fantastical beasts.

For centuries cultures, people have been fascinated by unusual and large creatures who lurk beneath the ocean.

Giant squid were thought to be the stuff of legend until in 1857 a Danish naturalist found a large squid beak on a beach, proving the existence of the the kraken or giant squid – one of a sea farer’s greatest fears.