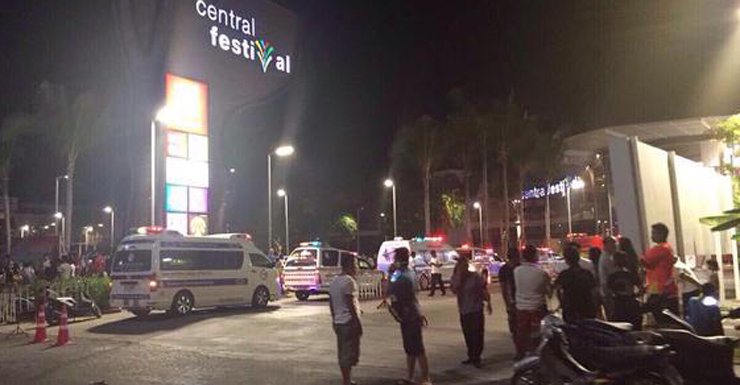 A car bomb has exploded in the parking area of a shopping mall on the Thai tourist island of Samui, wounding seven people including an Italian girl.

The bomb was packed inside a Mazda ute and exploded late Friday in the car park of the Central Festival mall on the island while late-night shoppers were inside the building.

Police said the car was stolen from Yala.

Yala is one of Thailand’s three southernmost Muslim-majority provinces that have been scorched by a 10-year insurgency that has killed more than 6,300 people.

“The car used was a Mazda pick-up truck stolen from Yala,” he added, without specifying whether the blast was believed to be linked to the conflict hundreds of kilometres away.

A spokesman for the island’s disaster prevention office said: “Six Thais and a 12-year-old Italian girl were treated for minor injuries”.

A second policeman at the scene also said Friday’s blast was caused by a car bomb.

Bomb squad experts scoured the debris early Saturday in the underground car park for clues about who might be behind the attack, which comes as Thailand’s junta tries to reassure tourists about the kingdom’s safety as a holiday destination following a coup last May.

Samui, known as Koh Samui, is a wildly popular tourist island in the Gulf of Thailand. About 20 million visitors flock to Thailand each year and are a key part of the economy.

Thai police are often accused of leaping to conclusions in the immediate aftermath of high-profile incidents.