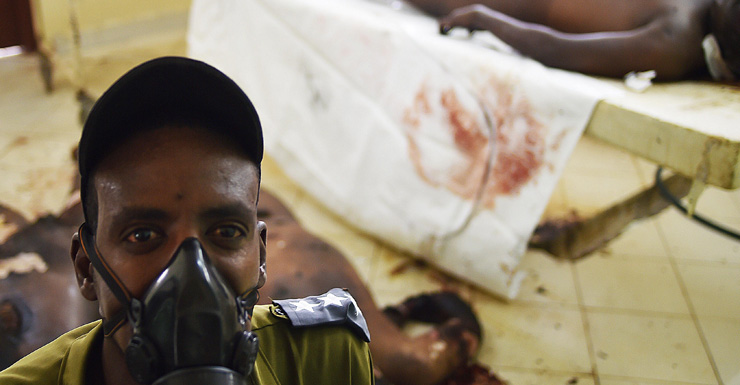 Authorities have named one of the gunmen who killed 148 people in a university massacre as a Kenyan national and highly intelligent law graduate.

This reveals the ability of Islamic terrorists to recruit within the country.

Interior ministry spokesman Mwenda Njoka said high-flying Abdirahim Abdullahi was “a university of Nairobi law graduate and described by a person who knows him well as a brilliant upcoming lawyer”.

The spokesman said Abdullahi’s father, a local official in the northeastern county of Mandera, had “reported to the authorities that his son had gone missing and suspected the boy had gone to Somalia”.

Describing Abdullahi as an A-grade student, Njoka said it was “critical that parents whose children go missing or show tendencies of having been exposed to violent extremism report to authorities”.

Kenya entered the second of three days of national mourning on Monday for those killed in last week’s massacre, the vast majority of whom were students.

Somalia’s al-Shabab militants attacked the university in the northeastern town of Garissa at dawn on Thursday, lining up non-Muslim students for execution in what President Uhuru Kenyatta described as a “barbaric medieval slaughter”.

The massacre, Kenya’s deadliest attack since the 1998 bombing of the US embassy in Nairobi, claimed the lives of 142 students, three police officers and three soldiers.

On Saturday, al-Shabab warned of a “long, gruesome war” unless Kenya withdrew its troops from Somalia, and threatened “another bloodbath”.

Hours after the warning, police in Garissa paraded four corpses of the gunmen piled on top of each other face down in the back of a pick-up truck.

Five men have also been arrested in connection with the attack, including three “co-ordinators” captured as they fled towards Somalia, and two others in the university.

A $US215,000 ($A281,322) bounty has also been offered for alleged al-Shabab commander Mohamed Mohamud, a former Kenyan teacher said to be the mastermind behind the attack.

The remaining 600 traumatised student survivors from the now-closed college have since left Garissa, boarding buses for their home towns.

More than 200 family members of those killed continue their agonising wait for the remains of their loved ones at the main mortuary in Nairobi.