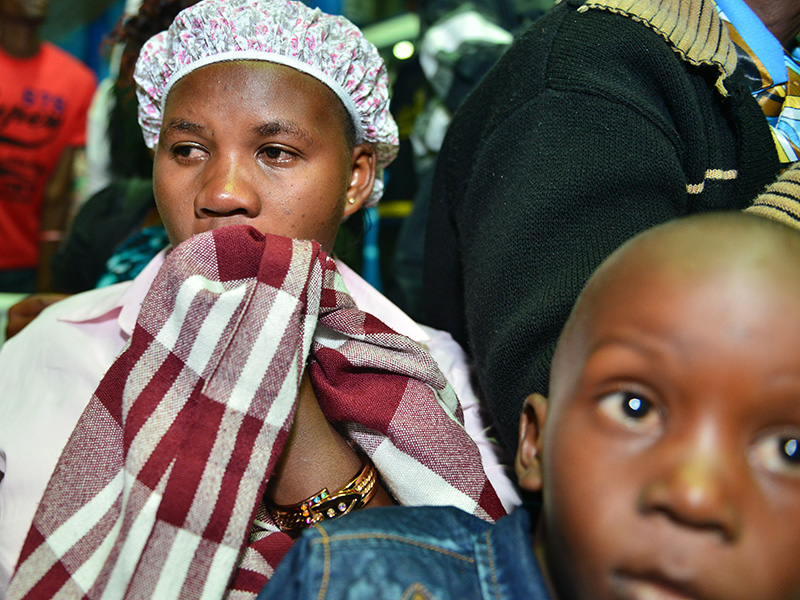 A survivor of Kenya’s university massacre who hid in a wardrobe for two days has been rescued, dehydrated but apparently unharmed.

The 19-year-old woman was initially too scared to come out until a university lecturer she knew came to convince her that the police officers were not the Al Shabaab gunmen who carried out the killing of 148 of her fellow students, police said.

“A survivor has been discovered, she was hiding in a wardrobe,” said Kenya Red Cross spokeswoman Arnolda Shiundu.

“She has been taken to hospital and she’s currently undergoing assessment by doctors.”

The student was rescued some 50 hours after the attack began, with the gunmen killed on Thursday evening.

Kenyan troops searching the building were alarmed when they heard sounds coming from inside a wardrobe.

“She kept asking for reassurance from the security forces they were not Al Shabaab before she could come out,” a police officer said.

“She was given milk and rushed to the Garissa hospital, where she is being observed before being given counselling.”

The student told the BBC she drank “body lotion when she felt hungry”.

Survivors who hid from the attack have recounted how the gunmen called on people to come out of their dormitory bedrooms and lie on the ground face down and then killed them.

Emergency workers have completed the task of collecting bodies, with the final toll declared as 148.

Their bodies are being flown to the capital, Nairobi, where grieving families wait to receive the remains of their loved ones.

“Three were the coordinators who were arrested while trying to flee to Somalia, two were arrested within the precincts of Garissa University,” he said, noting that four gunmen in the university were killed on Thursday.

The name of the three suspected organisers were not given, but Mr Njoka said the two arrested on campus included a security guard at the university and a Tanzanian named as Rashid Charles Mberesero.

The Tanzanian was reportedly arrested on the campus on Friday, found hiding as people carried out the grim work of clearing the piles of bodies.

“He was hiding in the ceiling of the university and had grenades,” Mr Njoka said, while the guard, a Kenyan of ethnic Somali origin, was named as Osman Ali Dagane.

He is suspected of helping the gunmen, and was found “in possession of jihadist materials,” Mr Njoka said.

A $215,000 bounty has also been offered for alleged Al Shabaab commander Mohamed Mohamud, a former Kenyan teacher believed to be in Somalia and said to be the mastermind behind the Garissa attack.

Known also by the alias “Kuno”, as well as “Dulyadin” and “Gamadhere” — meaning “long-armed” and “ambidextrous” — the alleged commander is also wanted in connection with a string of recent cross-border killings and massacres in Kenya’s north-eastern border region.

Kenya’s ethnic Somali region is also claimed by Al Shabaab as part of Somalia itself, and has long been lawless.

While Mohamud did not take part in the Garissa attack, students who survived the massacre described the attackers as ethnically similar — speaking Kenya’s Swahili language well, with some suggesting they may have been Kenyan too.

Al Shabaab militants meanwhile warned of “another bloodbath” and a “long, gruesome war” unless Kenya withdrew its troops from Somalia.

“We will … stop at nothing to avenge the deaths of our Muslim brothers until your government ceases its oppression, and until all Muslim lands are liberated from Kenyan occupation,” it said in a statement released Saturday.

“Until then, Kenyan cities will run red with blood … this will be a long, gruesome war of which you, the Kenyan public, are its first casualties.”

Neighbouring Uganda’s police chief says their country is also on high alert as new intelligence points to an attack at another educational institution, in a possible repeat of the attack in Kenya.

Survivor hid in a wardrobe