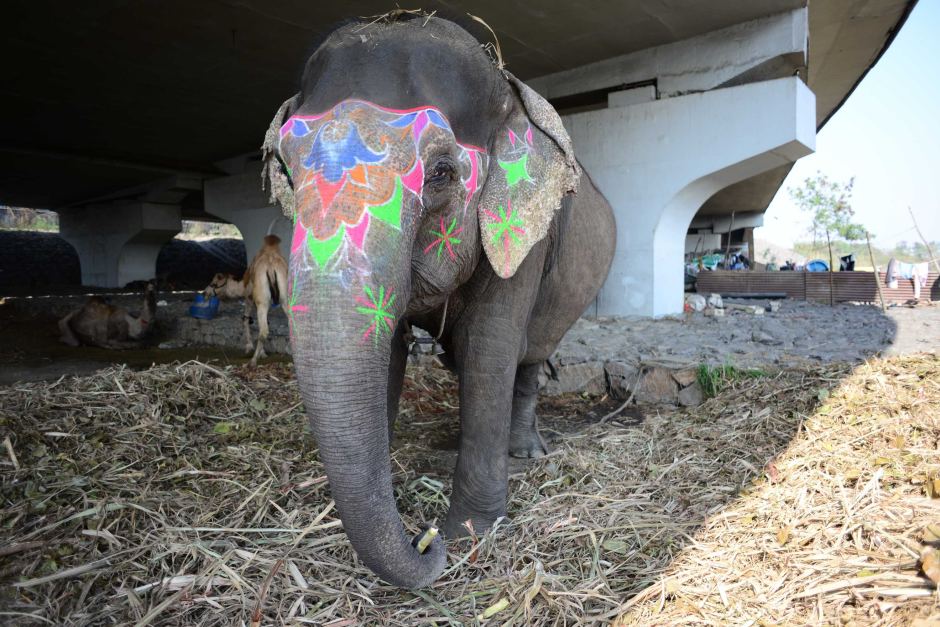 Elephants are revered in Hindu culture and they have been making appearances at weddings and functions in the Indian capital for generations, but their presence on the streets of Delhi may soon come to an end.

The government is no longer issuing new licenses to elephant keepers who are struggling to look after the animals in the growing city and environmental groups say it is time working elephants were taken off the streets.

Sitting under the concrete flyover where Abdul Hasan keeps his elephant Rupa, the 72-year-old said the animal was crucial to his and his family’s livelihood.

“They are needed for weddings, fairs and private functions. We rent them out for these festivities and earn our livelihood,” he said.

Mr Hasan charges $300 for Rupa to appear at an event or function and about $10 for a tourist who wants a short ride.

He says his family has kept elephants for generations but that is becoming increasingly difficult to look after them in the crowded concrete jungle.

“We face problems when the elephant has to climb up a flyover. It has also become very crowded – we avoid places with large crowds,” Mr Hasan said.

Government officials say there are only eight elephants licensed to work in Delhi – down from dozens in the past.

Conservationists call for all working elephants to be retired

Conservationists say there are up to 40 unregistered elephants working illegally in the city.

“People who need to exploit elephants for commercial purposes try to disguise it as a culture but it certainly isn’t a culture,” said Kartick Satyanarayan, who runs elephant rescue centre Wildlife SOS, several hours’ drive north of Delhi.

His organisation has rescued dozens of street and circus elephants from across India.

“A lot of these elephants are chained 23 to 24 hours a day sometimes and given very little breaks. That impacts their mental health quite severely,” he said.

When they are not chained, Mr Satyanarayan says, they are forced to walk along hard, busy roads for long periods which injures their feet and often results in them being hit by cars or trucks.

While the government is not issuing new licenses for elephant keepers, Mr Satyanarayn would like to see all working elephants – legal or illegal – taken off the streets.

“It is ironic we do worship the elephant god, we believe in elephants, elephants are revered, but yet they get abused sadly because of that,” he said.

“I think it is time that we all stood up, noticed what is going on and tried to make a difference to the elephants.

“They need our help and you know elephants never forget, lets try and help them.”

Mr Hasan says he knows his days of elephant keeping are numbered, but he worries about what he and his children will do for money when Rupa’s working life finally comes to an end in a city where unskilled work is in short supply.

“After this elephant, we cannot buy more elephants – the government will not allow us to keep it at this place,” he said

“The next generation will have to find ways to do new things.”