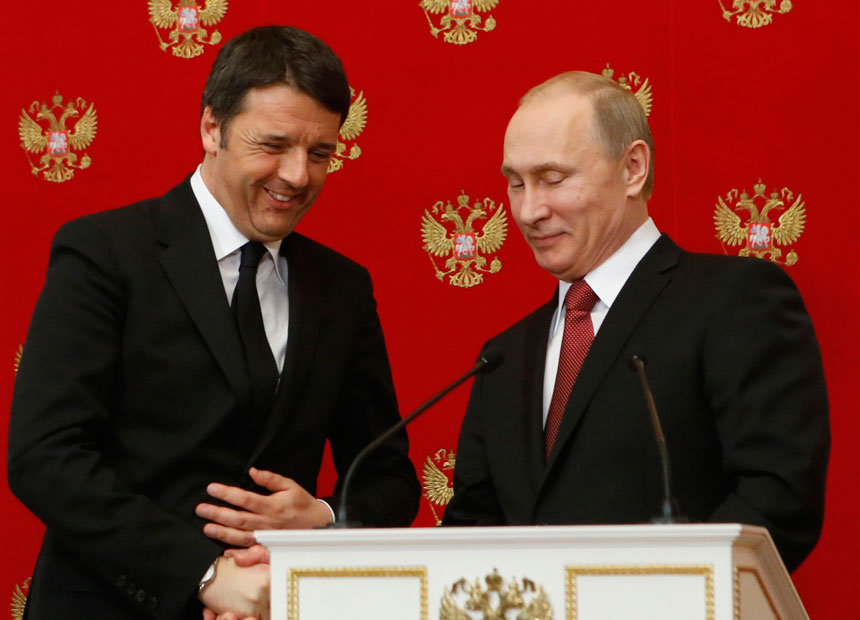 Russian President and political macho man of land, sea and sky, Vladimir Putin, had not been seen in public for 10 days, until his sudden reappearance on Monday.

The 62-year-old was last sighted on March 5 when he met Italian Prime Minister Matteo Renzi in Moscow.

On Monday he dismissed days of frenzied “rumours” over his health and whereabouts.

“We would be bored if there were no rumours,” Putin said at a meeting with Kyrgyz President Almazbek Atambayev at the sumptuous Konstantinov’s Palace just outside Saint Petersburg.

But what of those so-called rumours? During his absence, the internet went wild trying to figure out where Mr Putin could have been hiding.

We all know that he loves to sample Siberia’s slightly more weathered and extreme environments from time to time, but usually he is only too happy to let everyone know he is doing so.

It is entirely possible he was just having a little ‘me time’ – you know, sitting pretty inside the Kremlin honing his judo skills, but there are plenty more interesting theories out there.

While the Kremlin kept pumping out material to try and prove the PM wasn’t missing, we look at some of the best theories about where he was.

Putin was the victim of a coup

Like many polarising leaders before him, claims surfaced from the figurehead of a pro-Kremlin Islamic Committee, suggesting his ally Putin had been overthrown.

The report states Putin is ‘alive’ but ‘neutralised’ and that former FSB (Russian National Security) chief Nikolai Patrushev is behind the plot to replace him.

Playing Dad – Putin rushes to the birth of his lovechild

If the Swiss can report facts just as accurately as they keep time then Mr Putin fled to a posh town on the Swiss/Italian border to be at the birth of a lovechild with Alina Kabaeva.

Kabaeva is a retired Olympic gymnast, 31, who previously worked in the Russian parliament but now has a role at a Swiss media company. Reports suggested the President reserved two rooms at the birth clinic for his lovechild’s arrival.

A bad batch of Borscht – Putin was simply ill

An anonymous official from the Kazakh government said Vladimir Putin had to cancel a planned trip to Kazakhstan because of illness.

Mr Putin was meant to visit the country – one of Russia’s closest allies – this week, but the official told Reuters that “the visit has been cancelled. It looks like he (Putin) has fallen ill”.

Given Russia and the Kazakhs are in cahoots, there have been questions over the veracity of this claim with some suggesting the comments are a ploy to throw the media off wilder lines of speculation.

Link to the Nemtsov assassination?

Influential Russian opposition party figure Boris Nemtsov was shot dead last month next to the Kremlin and one of the men arrested for the murder, Zaur Dadayev, has been called a “true warrior and patriot” by the Head of the Chechen Republic Ramzan Kadyrov.

Because of this, blame for the murder is being pointed at the Chechens, which has infuriated the Russian intelligence agency FBS.

Given Mr Putin enjoys a friendly relationship with the Chechens some are saying the President had to lie low for a little bit to let things cool down.

The hashtag went viral in Russia and the Western world with some very creative Twitter artists using photos of the President sunbaking to portray him as dead.

This rumour was spawned off the back of the comments from the Kazakh official who said he was ill.

But it was swiftly shot down by Kremlin sources who said the President was fit and well, and backed up by a CIA figure.

Where in the world was Vladimir Putin hiding?