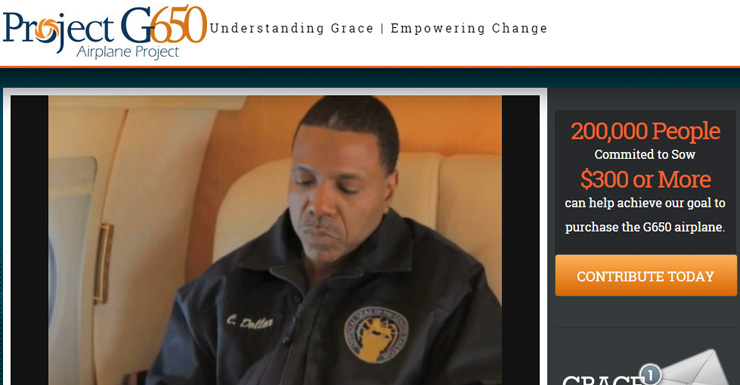 Millionaire preacher Creflo Dollar, who appears on early-morning Australian television, has back-peddled on a plea for donations to help him buy a luxury corporate jet.

Mr Dollar, 53, whose global ‘ministry’ is based in the US, had requested that supporters contribute money so that he could buy a Gulfstream G650, reportedly worth more than $60 million.

The televangelist was reportedly asking for 200,000 people to donate $300 or more each in order to reach his financial goal, but this call-out has now disappeared from his World Changers International website.

The World Changers local office in Queensland told The New Daily it had no knowledge of the campaign.

“I’m not familiar with that,” said office manager Arlene Benjamin.

“We haven’t had anyone donating for it, or asking about it.

“We haven’t heard anything.”

Mr Dollar’s television program, in which he regularly proclaims that wealth is a sign of God’s approval, airs in all Australian states, and is a prime example of a religious movement that has increasingly gained a foothold in Australia since the 1970s.

Murdoch University Professor Marion Maddox, who researches the influence of religion on Australian society and politics, told The New Daily that these so-called “prosperity preachers” regularly prey on the poor, who are expected to give 10 per cent of their pre-tax income in order to become “blessed” by God.

“It stresses the idea that people who are already wealthy are rich because God has blessed them, and that you too can become rich by giving 10 per cent of your pre-tax income to the church,” Professor Maddox says.

“It often has a strong appeal to people from lower socio-economic groups.

“If you’re in fairly desperate circumstances and if you’ve tried everything else, and the traditional avenues like applying for a job haven’t worked, then something with a more supernatural element seems worth a try.”

The G6 jet is a favourite of wealthy individuals such as billionaire investor Warren Buffett. Fellow preachers Kenneth Copeland, Joyce Meyer, Jessy Duplantis and Benny Hinn – who have all appeared on Australian TV – have also bought luxury jets after pleas for donations.

“The luxury jet is the iconic status symbol for prosperity preachers, but one has to wonder why such conspicuous consumption is essential for the sort of work that Creflo Dollar does, other than as a marker of ‘I’ve made it’,” Professor Maddox says.

Despite historical proof to the contrary, these religious leaders teach that Jesus Christ was a rich man in order to justify their “ostentatious displays” of wealth, says the Professor.

“They have different ways of getting around the fact that the Bible is actually very negative about trying to accumulate material wealth, particularly at the expense of other people, which is essentially what is going on when somebody says, ‘send me donations so I can buy a luxury jet’.”

Mr Dollar’s organisation recently opened a new church in Queensland. Its head pastor did not return a call from The New Daily.

In 2012, Mr Dollar was arrested on family violence charges for grabbing his 15-year-old daughter by the neck. The charges were dropped after he completed an anger management course.

“When requests for money are made in the name of any kind of impressive sounding cause, you should always ask yourself what it is actually promoting before you hand over your cash,” Professor Maddox says.

Australian Christian Churches and the Hillsong Church did not respond to request for comment.