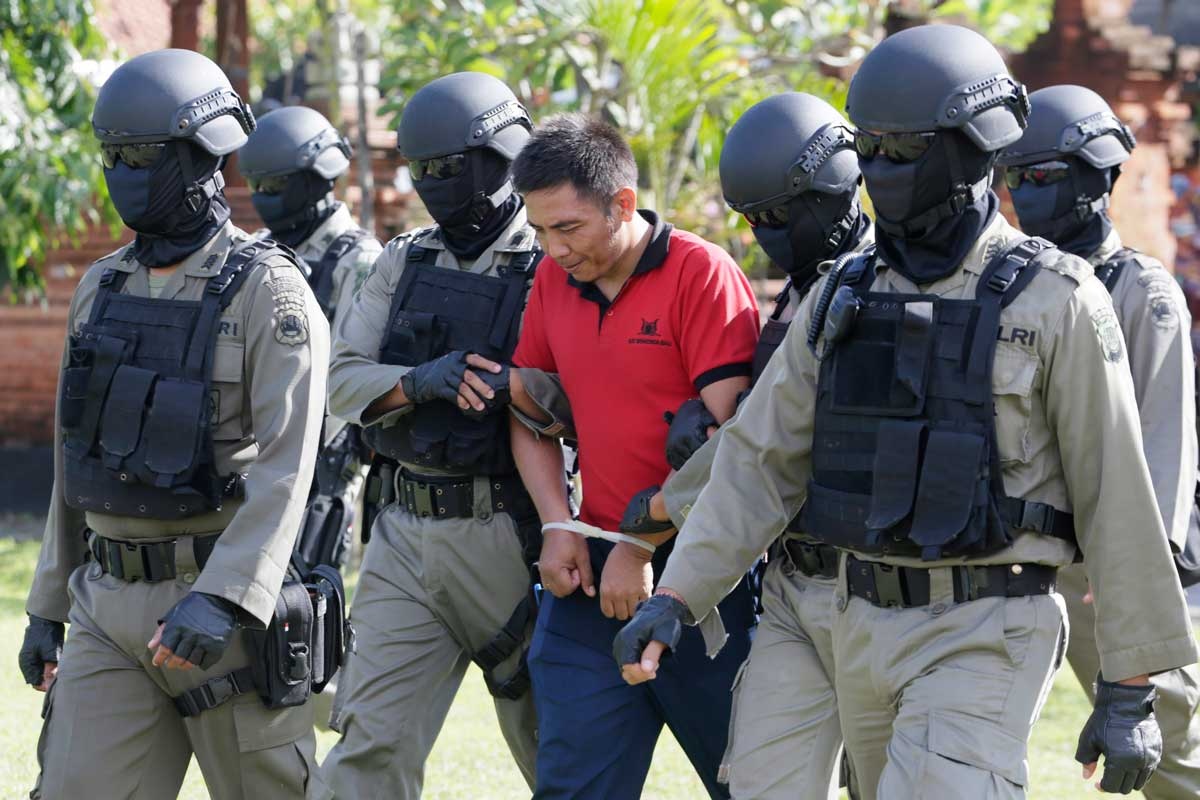 More than 20 heavily-armed officers will escort the handcuffed Myuran Sukumaran and Andrew Chan on to the military plane that takes them to their execution.

Indonesian authorities put on a show of force in Bali on Friday, demonstrating how the Australian drug smugglers will be taken from Kerobokan jail to the penal island Nusakambangan.

Police mobile brigade (Brimob) commander Rudy Harianto invited the media to a simulation of their transfer from jail to the airport in armoured vehicles.

• Why did the AFP hand over the Bali Nine?
• Bali Nine pair’s appeal thrown out

In the exercise, 22 heavily-armed officers clad in balaclavas took the prisoners, played by two police, on and off a military plane, represented by a bus.

A Brimob water cannon is on stand-by and the military has Sukhoi jets available to escort the plane in flight.

At Nusakambangan, a navy presence has been building around the island for the past week, with Indonesia’s military commander Moeldoko saying they had to be ready for anything.

The Bali Nine pair remain in Kerobokan jail awaiting the warden’s signal that it’s time to go to Nusakambangan after the move was postponed last week because the island was not ready.

Authorities plan to hold the Australians and eight others in Besi prison before they meet their end in front of a firing squad.

Attorney-General HM Prasetyo has not named all 10 prisoners to face the firing squad, but 10 drug offenders are on death row, with the confirmation that another Nigerian man, Okwudili Oyatanze, has been denied presidential clemency.

According to media reports, he and three others were caught smuggling heroin into Jakarta in 2001.

Prime Minister Tony Abbott spoke to Mr Joko by phone on Wednesday night regarding the condemned Australians, and described the conversation as positive.

Mr Joko has also spoken with leaders of France, Brazil and the Netherlands about their citizens facing the death penalty, but has maintained his country has a sovereign right to carry out its laws.

Lawyers for Chan and Sukumaran have urged Indonesia to look at their clients’ cases without the distractions of arguments about sovereignty.

They plan a legal appeal and argue it would be unjust to execute them in the meantime.

TEN DEATH ROW PRISONERS IN LINE FOR EXECUTION IN INDONESIA: