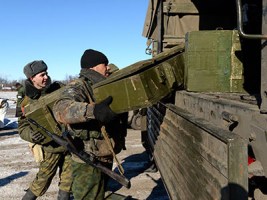 Pro-Russian rebels load ammunition onto a truck near the eastern Ukrainian city of Debaltseve on February 17, 2015. Ukraine on February 17 accused rebels and Russia of scuppering a fragile three-day-old ceasefire after insurgents armed with automatic weapons and rocket-propelled grenades stormed the flashpoint town of Debaltseve and engaged thousands of troops there in intense combat. AFP PHOTO / VASILY MAXIMOV (Photo credit should read VASILY MAXIMOV/AFP/Getty Images)