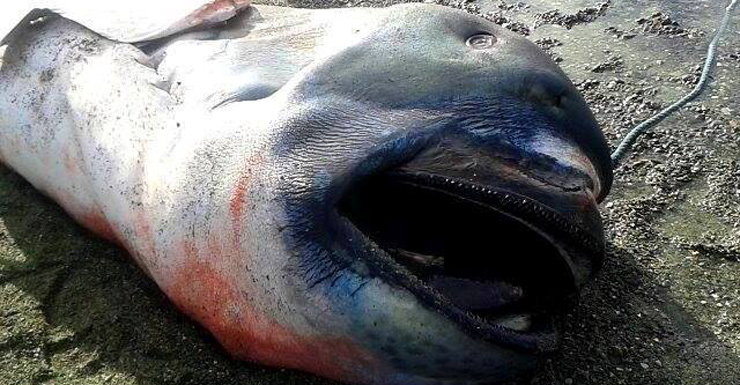 An extremely rare, almost five metre shark, with a huge jaw, has been found dead by Filipino fishermen.

Aptly named by scientists as Megachasma, the megamouth shark is thought to be one of less than 100 of the species ever seen by human eyes.

Undiscovered until the 1976, the latest specimen of the deep sea fish washed ashore in the Albay province of the Philippines on Wednesday.

• ‘Horrific’ shark killed by trawler near Victoria
• Beaches shut for fear of ‘monster’ shark
• Should we be killing sharks?

The megamouth is a close relative of the Great White, but is believed to be far more docile.

Rather than attacking large fish, the megamouth is usually found with a stomach full of krill, the same type of small shrimp on which blue whales feast.

It seems to never visit the surface, which may explain why it is so infrequently seen or caught.

Bureau of Fisheries and Aquatic Resources head Nonus Enolvus reported the find on Facebook, and told local media that her team has nicknamed it after an (arguably far cuter) character from a Disney movie.

“We named the megamouth ‘Toothless’ because it looks a lot like a nightfury from the How to Train Your Dragon Movie,” she said.

Ms Enolva said that the dead shark was found with wounds and was missing its tail. She suspected it might have been trapped in a fishing net.

The Marine Wildlife Watch of the Philippines has estimated that this is only the 66th sighting of the creature, and only the 15th in the country.

The carcass has been frozen in a nearby ice plant awaiting a full inspection.