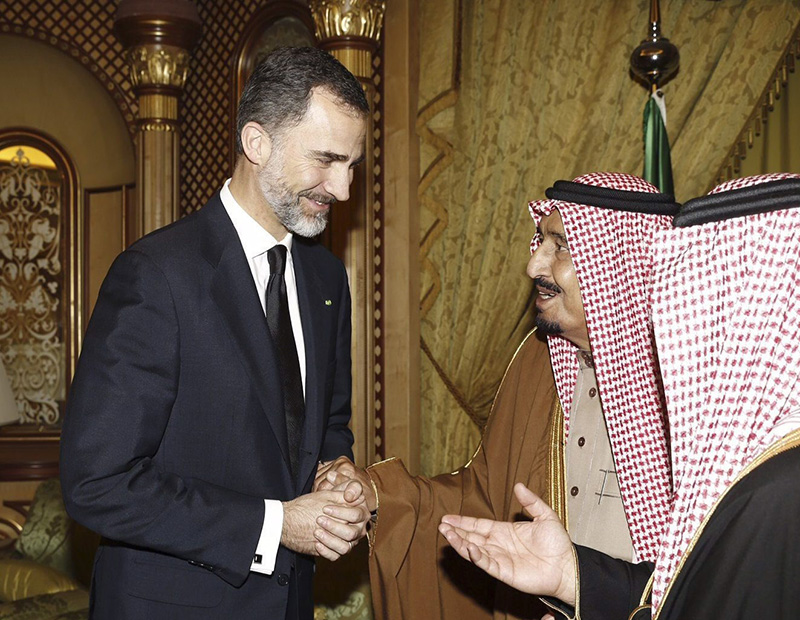 World leaders have converged on Saudi Arabia to offer condolences following the death of King Abdullah, with US President Barack Obama cutting short a trip to India to pay respects.

Obama will travel to Riyadh on Tuesday to meet new King Salman, the White House said on Saturday.

Since Abdullah took the throne in 2005, Saudi Arabia has been a prime Arab ally of Washington, and last year joined the coalition carrying out air strikes against the Islamic State jihadist group.

One after another, foreign aircraft landed at a Riyadh military base where leaders from Africa, Europe and Asia descended a red-carpeted ramp to be welcomed by Saudi officials and served a traditional tiny cup of Arabic coffee.

They gathered at the Al-Yamamah Palace, the royal court, to line up and greet King Salman and his heir Crown Prince Muqrin, television pictures showed.

The government declared Sunday a holiday so citizens throughout the country could offer condolences and pledge symbolic allegiance to their new monarch.

Abdullah died on Friday at the age of about 90 after being hospitalised with pneumonia.

World leaders have praised the king as a key mediator between Muslims and the West, but campaigners criticised his rights record and urged Salman to do more to protect freedom of speech and women’s rights.

“Saudi Arabia is a partner, both economic and political,” Hollande said before his arrival in Riyadh with Defence Minister Jean-Yves Le Drian.

Obama paid tribute to Abdullah as a “valued” ally while the State Department indicated cooperation between Washington and Riyadh would continue.

Salman, 79, pledged to keep the conservative, oil-rich Muslim kingdom on a steady course and moved to cement his hold on power.

He named his nephew, Interior Minister Prince Mohammed bin Nayef, 55, as second in line to the throne behind Crown Prince Muqrin, 69.

As the top producer in the Organisation of the Petroleum Exporting Countries, Saudi Arabia has been the driving force behind the cartel’s refusal to slash output to support oil prices, which have fallen by more than 50 per cent since June.

Salman is widely expected to follow closely in Abdullah’s footsteps, in foreign and energy policy as well as in making moderate reforms.

Abdullah pushed through cautious changes, challenging conservatives with such moves as including women in the advisory Shura Council.

But the kingdom is still strongly criticised for a dismal human rights record, including the imprisonment and flogging of dissidents. It is also the only country in the world that does not allow women to drive.

Amber Heard’s sister and friend give evidence
‘Should have been a penalty’: Boy crash-tackled by PM gives his verdict
Apple sued over ‘ear shattering’ AirPods alert
Russian Google to file for bankruptcy
Man arrested at NSW school for bestiality
Concern about COVID-19 deaths in aged care
Hostage beheaded in new video
Today's Stories