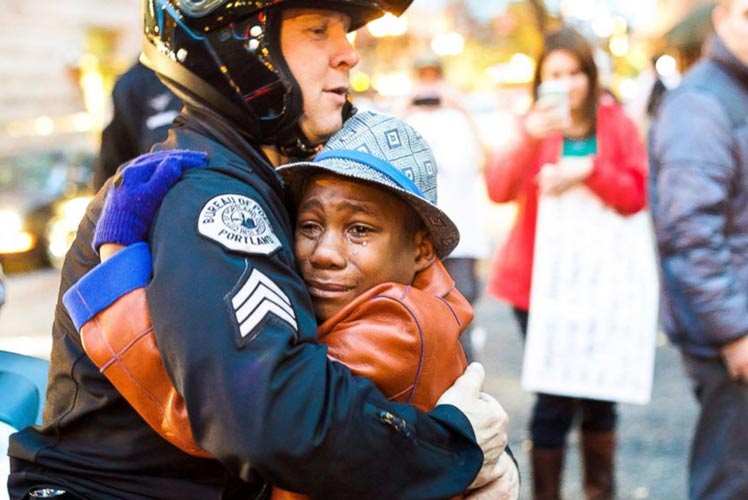 A man leaves a wheelbarrow containing an Ebola sufferer outside a Monrovia hospital in Liberia. Photo: Getty

A horror virus thought to be permanently resigned to the annals of history, Ebola made an alarming return in the age of modern medicine. Ill-equipped and caught entirely off guard, many were sent into panic as images of West Africa filtered through the global news.

Airports were sent into lockdown as the death toll reached far into the thousands.

Since the first known case in December 2013, the situation has improved dramatically. In October, Africa’s most populous country Nigeria was declared Ebola-free and researchers are currently testing a vaccine for the virus.

March: the disappearance of MH370 A family member of a missing MH370 passenger from China breaks down speaking to media at Kuala Lumpur International Airport. Photo: AAP

In what remains the greatest aviation mystery of our time, the world was thrown completely off balance by the news an entire Boeing 777 containing 239 people had vanished into thin air. The pained faces of relatives camped out at international airports summed up the general sentiment: how could something like this happen?

Extensive searches returned nothing but dead ends and family members continued to live in a state of limbo, waiting for a plane that never came.

As hope of finding the plane faded, search efforts were wound back and are expected to come to an end in May 2015.

“I still have hope,” Steve Wang, who lost his mother, told The Guardian. “Maybe one per cent – maybe half a per cent – but I still keep the hope.”

The world was reminded of the tragedy again on December 28, when AirAsia flight 8501 disappeared from the radar during inclement weather.

Coupled with the Trans Asia plane crash in Taiwan on July 23 and a mysterious Air Algerie crash a day later, and the shooting down of Flight MH17 over Ukraine, 2014 marked a tragic year for the aviation industry. Once one of the most well-respected athletes in the world, Oscar Pistorius’ fall from grace was spectacular and dramatic. After shooting dead his model girlfriend Reeva Steenkamp in February 2013, the paralympian was embroiled in one of the most attention-grabbing trials of the century.

All eyes were on double-amputee Pistorius as he broke down time and time again, sobbing and struggling through testimony as the court recounted details of the bloody night Reeva died. It was a stark contrast to his heroic performances on the track.

With onlookers divided as to Pistorius’ guilt, the highly anticipated verdict elicited both outrage and relief: not guilty of murder, guilty of culpable homicide. Pistorius received a maximum jail sentence of five years.

April: the abduction of 276 Nigerian schoolgirls A screen grab from a May video by Nigerian Islamist extremist group Boko Haram of missing girls in an undisclosed location.

The abduction of 276 innocent schoolgirls in Nigeria took a while to sink in across the rest of the world. Threats from Boko Haram, the militant group responsible for the kidnappings, to rape, marry or sell the young women prompted the world to kick into action. Michelle Obama shared a photo of herself holding a sign proclaiming “Bring Back Our Girls” and other prominent figures followed suit.

The campaign, however, failed to galvanise those tasked with taking the appropriate action to return the girls to their families.

Some of them managed to escape but, eight months later, around 200 of them remain in the clutches of militants who claim they have married them and made them convert to Islam. The passenger ferry sinks off the coast of Jindo Island. Photo: Getty

Overloaded and with questionable seaworthiness, South Korean passenger and freight ferry the MV Sewol made an unusually sharp turn, causing it to sink into the waters of the East China Sea with astounding speed.

Later, horrifying revelations about the actions of the captain and crew prompted international condemnation. The captain in particular was lambasted for his decision to abandon his ship and the hundreds of passengers on board, prioritising his own safety before theirs. Captain Lee Jun-seok and three other crew members were later charged with murder.

July: the downing of MH17 A firefighter attempts to extinguish a blaze after the MH17 crash. Photo: Getty

A nightmare almost too extreme to digest, the world reacted with shock and horror to news that yet another Malaysia Airlines plane had met a disturbing fate.

Shot down over eastern Ukraine with 298 passengers and crew on board, Flight MH17 dominated the news for weeks as more heart-wrenching details emerged.

Possibly the most heartbreaking faces of the tragedy were the Australian Maslin children – 12, 10 and 8 – who died while travelling with their grandfather, leaving their traumatised parents behind. Palestinian men scramble to run from debris after a bomb from an Israeli air strike in Gaza City. Photo: Getty

The ongoing conflict between Israel and Palestine escalated on July 8, when Israel launched a large military offensive, claiming it was in response to Palestinian rocket attacks.

Images of badly injured civilians and video footage of deafening rocket blasts in residential areas communicated the scale of the conflict to the outside world.

After more than a month of ongoing attacks, the conflict subsided, leaving behind a death toll of more than 2000. One of the few Hollywood stars to hold universal appeal, hearts broke the world over with the news that beloved comedian and actor Robin Williams had taken his own life after a long battle with depression.

Celebrity friends like Billy Crystal tearfully farewelled their friend while flowers piled up at the filming locations for some of Williams’ most iconic roles, from the Mork and Mindy house to the Mrs Doubtfire home.

Williams’ 25-year-old daughter Zelda paid tribute to her father with a new tattoo of a hummingbird on her hand and his birth date. Video footage of American journalist James Foley before he was beheaded by ISIL soldiers. Photo: AAP

There was ongoing media debate about the coverage of a series of Islamic State beheadings of aid workers and journalists. The imagery of American journalists James Foley and Steven Sotloff kneeling in the sand awaiting their own death was disturbing for many.

The New York Post, in particular, came under fire for their “insensitive” cover featuring an image of James Foley with a knife to his throat accompanied by the headline “Savages”. A police officer runs with his gun drawn outside the Canadian Parliament in Ottawa. Photo: AAP

The usually peaceful city of Ottawa was left reeling when lone gunman Michael Zehaf-Bibeau fatally shot a soldier at the national war memorial before moving to Parliament buildings.

As it happened, social media provided terrifying glimpses inside Parliament, where parliamentarians had barricaded themselves behind doors. Zehaf-Bibeau was halted on what could have developed into a significant killing spree by the Sergeant-at-Arms Kevin Vickers, who killed the Islamic convert to bring the dramatic shootout to an end.

Vickers received a hero’s welcome upon his return to service, becoming visibly emotional as he received a standing ovation for his efforts under immense pressure. A demonstrator flashes the victory sign in front of a burning police car during clashes between police and protesters over the Michael Brown verdict. Photo: Getty

The shooting of black teenager Michael Brown by a white police officer in the town of Ferguson, Missouri, ignited a rage that spread across America. Many felt the incident exemplified a level of racial profiling that still exists in American society. Others felt the officer, Darren Wilson, acted in self defence.

The November 24 verdict, in which a jury chose not to charge Wilson for Brown’s death, sent shock waves through both the black and white community. Some came together in a show of support and peace, while others took to the streets, lighting fires and vandalising property to express their outrage.

The most lasting image from the protests was that of a young black boy in tears embracing a white police officer in San Francisco. The photo went viral as a symbol of peace and acceptance.

Riots have again flared up in Missouri after more deaths of black people at the hands of white police officers.

November: the death of Phillip Hughes The Australian team huddle over the number 408, the number on Phillip Hughes’ baggy green cap, after a win. Photo: Getty

Now recognised as one of sport’s blackest days, the accident that killed Australian Test cricketer Phillip Hughes was both tragic and shocking in its apparent randomness. Fast bowler Sean Abbott delivered the bouncer that hit Hughes in the neck, forcing doctors to place the 25-year-old in an induced coma before his eventual passing.

The cricketing community rallied around Abbott, himself only 22 years old, as the nation grieved with Hughes’ family. Close friend Michael Clarke was a stoic figure throughout the ordeal, fondly recalling his teammate’s good humour and kind heart and acting as a pallbearer at Hughes’ December 3 funeral.

Social media users mourned in their own way, with the hashtag #PutOutYourBats encouraging cricketers to place their bats outside their front door in memory of Hughes. A hostage runs into the arms of waiting police officers after escaping from the grips of gunman Man Haron Monis. Photo: AAP

The first glimpse of terrified hostages pressed up against the window of the Lindt Cafe in Sydney’s Martin Place alerted Australians to what quickly became a national horror story. Gunman Man Haron Monis took 17 people hostage, closing down the busy CBD strip and bringing the city to a standstill.

After 16 hours – and the escape of several terrified hostages into the arms of waiting police – the siege came to a violent end, leaving Monis and two of his innocent captives dead. The loss of young mother Katrina Dawson and Lindt store manager Tori Johnson was felt in the hearts of complete strangers, evidenced by the sea of flowers that filled Martin Place in the days after their deaths.

December: the Taliban attack on a Pakistan school An injured Pakistani student lies on a bed at a hospital as fellow students look on. Photo: Getty

In the deadliest militant attack in Pakistani history, Taliban militants stormed a school in Peshawar, killing 141 people, 132 of them children. Children as young as 10 were shot and made to watch their classmates and teachers die in what the Taliban described as a revenge attack for a government operation.

The atrocity left the international community in a state of disbelief, while many public figures were quick to openly condemn the group, Malala Yousafzai among them.

“Innocent children in their school have no place in horror such as this,” Yousafzai said.

Moments and images that shocked the world in 2014