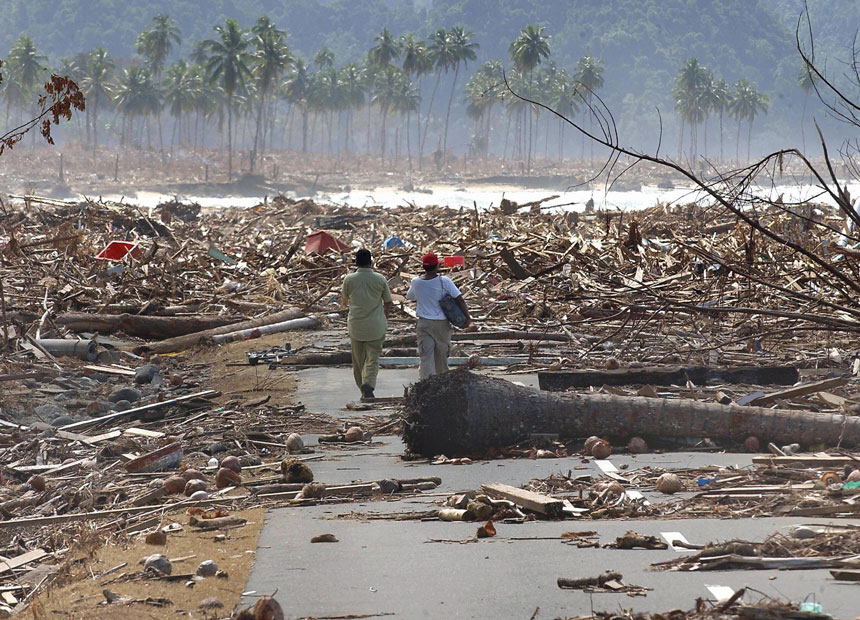 Erlinawati was heavily pregnant on the day the earthquake struck on Boxing Day 10 years ago.

“We all went outside [and] were all gathering in front of the house and another earthquake hit.”

She said the sea started rising and everybody fled.

“Everyone was running amok, we also ran because we thought the water was coming our way – we all ran, nobody wanted to die, we all wanted to live.”

Ms Erlina was nine months’ pregnant but still managed to run for her life.

“I was running with my big belly. I didn’t realise it anymore. I forgot that I was pregnant. I just ran.

“Suddenly my water broke. It just came out of me. After that I was taken into the house and they put me on the ground. I laid down and gave birth. It didn’t take long. Five minutes and my baby was born.”

The rising seas turned out to be the most deadly tsunami on record that ravaged Banda Aceh and left scores dead.

The US Geological Survey estimated 170,000 people died in Aceh alone, but in Indonesia census data is notoriously inaccurate, with some births never registered.

At the time, the Indonesian government estimated the death toll in Aceh was closer to 220,000 people.

Whatever the true measure of the human cost, it was amid the death and carnage that Ms Erlina was giving birth.

“In such emergency conditions, no-one really helped, no midwives,” she said.

“There was no equipment, plastic bags were used as gloves, the [umbilical] cord was cut using a kitchen knife, the baby’s navel was tied using a plastic rope.

“It was sad. Very sad. There is no single mother in the world who would choose to give birth in that way. No-one.”

Son’s birth ‘the greatest miracle ever’

But despite the tragedy and horror of the circumstances, Ms Erlina saw her son as a gift.

“It was a miracle. When I gave birth and found out it was a boy, it was the greatest miracle ever,” she said.

“No happiness compares to my giving birth to a healthy baby boy. I already had two girls and now I’ve got a boy.”

Not only that, Ms Erlina said her son, Muhammad, had a special connection to the ocean.

“He’s not afraid of the beach [but] we don’t really take him to the beach because when we do, the sea water would rise.

“People would be swimming in the beach, but when he’s there the waves would get high. That happens every time.

“All I know is that every time he comes to the beach, the wave would get bigger. When I ask his sisters to take him to the sea, they would refuse. They are afraid the sea would take him.”

Muhammad said he liked going to the beach and was not afraid of the waves.

Just like any young boy reaching their 10th birthday, Muhammad has high hopes about what he might receive.

“I would really like to get a tape [player] mobile phone, [a] PlayStation and many more,” he said.

“I would like to have a cake and then go to a restaurant.”

But Ms Erlina said they would wait until the day after Boxing Day to celebrate his birthday.

“That’s the plan. There won’t be any celebration of a happy birthday. We won’t do that. There is no way we would happily celebrate while other people pray … in sadness,” she said.