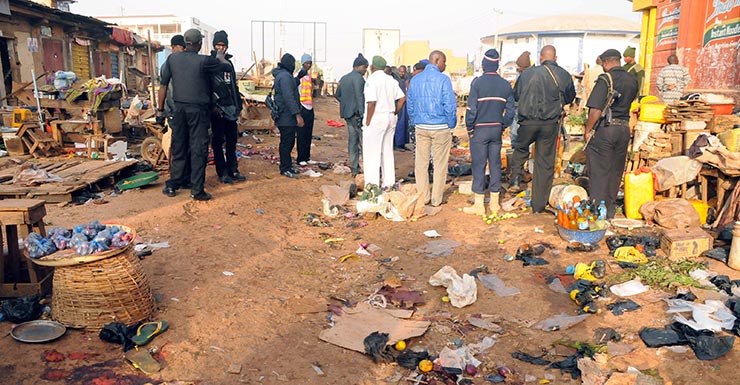 Two blasts have rocked crisis-hit northern Nigeria, with one bombing killing at least 20 people and a second explosion setting fire to a market, where heavy casualties were feared.

The cities targeted on Monday, Bauchi and Gombe, have both been hit previously by Boko Haram and while there was no claim of responsibility for the latest unrest, the Islamists were suspected.

Violence in the northeast is escalating ahead of Nigeria’s February 14 general elections, with many concerned that voting will be impossible in large parts of the region.

The first bombing hit the Dukku motor park on the outskirts of Gombe city, capital of Gombe state, at roughly 10.50am, officials said.

State secretary for the Red Cross Abubakar Yakubu Gombe said his staff sent 20 body bags to the scene and “they have all been exhausted”, adding that another 18 people with “serious” injuries had been taken to hospital.

The Islamists have claimed a number of attacks at bus stations, often targeting people who are heading to Nigeria’s mainly Christian south.

The second blast hit Bauchi city, the capital of Bauchi state, at roughly 5.00pm but there was no confirmation that a bomb was responsible.

“There was an explosion in the market with a large number of women traders,” said Adamu Abubakar of the Red Cross in Bauchi.

“There are heavy casualties of course, but for now we can’t do anything until the fire is put out.”

President Goodluck Jonathan, who is running for a second term, has on several occasions claimed that Boko Haram’s defeat was imminent, even as the violence has escalated.

The insurgency has killed more than 13,000 people and forced more than 1.5 million others from their homes, straining resources in the embattled northeast, as communities struggle to care for those displaced.